His Excellency Ambassador Mohamed Najm, the Permanent Representative of the Arab Republic of Egypt to the Organization of Islamic Cooperation (OIC), accompanied by His Excellency Mr. Mustapha Hassanein, Advisor at the Consulate General, paid a courtesy visit to His Excellency Prof. Koutoub Moustapha Sano, Secretary General of the International Islamic Fiqh Academy (IIFA), on Thursday, 13 Rabi’ al-Thani 1443H corresponding to 18 November 2021G At the headquarters of the Secretariat General of the Academy.

His Excellency expressed his sincere thanks and great appreciation to His Excellency the Secretary General for the warm welcome, noting in this regard that this visit will be his last to the Academy, as he is at the end of his official term as permanent representative of his country to the OIC, and he came specifically to bid farewell, and to express his appreciation and admiration for the qualitative changes and clear developments witnessed by the Secretariat General of the Academy, whether at the administrative level or the scientific and intellectual level since His Excellency Prof. Sano began his duties as Secretary General of the Academy a year ago, praising His Excellency’s great keenness to unify the Ummah’s voice, spread correct concepts, and promote the values ​​of moderation and pacifism.

His Excellency concluded his speech by expressing his aspiration to strengthen relations of cooperation and communication between the Secretariat General of the Academy and the Arab Republic of Egypt through the new permanent representative to the OIC, who will arrive in Jeddah soon, wishing His Excellency and the Academy success in achieving the activities and programs contained in the Academy’s strategic plan. His Excellency also affirmed he is fully prepared to provide all facilities and services necessary for the success of the Academy’s various programs and projects.

For his part, His Excellency welcomed the Ambassador and thanked him for this visit, which indicates his appreciation and the Egyptian delegation to the Academy. It also affirms the sincere desire to consolidate relations of cooperation and communication between the Secretariat General of the Academy and the scientific and religious institutions in the Arab Republic of Egypt. His Excellency also lauded the keenness he witnessed during his official visit to Egypt to strengthen the bonds of cooperation and coordination between the Academy and the institutions concerned with issues the Academy deals with through its resolutions and conferences, especially Al-Azhar Sheikhdom, Dar Al-Ifta, and Al-Azhar University. On this occasion, His Excellency expressed his deep appreciation and great gratitude to His Excellency the Ambassador for the support and care he provided to the Academy during his tenure as a permanent representative of his country to the OIC. His Excellency also expressed his regret over the news of the Ambassador’s departure at this time, after he left a good impression and a good memory for everyone who knew him and dealt with him and wished him success in his new assignment in Egypt. 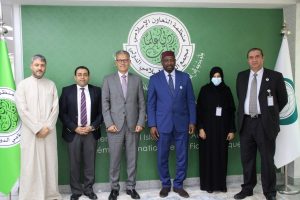 The Secretary General concluded his speech by stating that the Academy will carry on working and communicating with the new permanent representative, and with all the Egyptian scientific institutions and centers concerned with common issues and themes, as the Academy will soon sign a partnership and cooperation agreement with the Egyptian Awqaf Ministry, confirming the strength of bilateral relations with Egypt, and in recognition of its outstanding scientific contributions to the Muslim world.