His Excellency professor Koutoub Moustapha Sano, Secretary General of the International Islamic Fiqh Academy (IIFA), received at his office at the Headquarters of the General Secretariat of the academy on Wednesday morning, 9 Jumada II 1443H, corresponding to 12 January 2022G, H.E. Ambassador Mohamed Bamba M. Boba, Director General of the Regional Mission of the Organization of Islamic Cooperation (OIC) in the Federal Republic of Somalia, who briefed the Secretary General on the latest developments in Somalia and discussed possible areas of cooperation and coordination between the mission and the Academy.

The Secretary General welcomed His Excellency and thanked him for the visit, noting the great role played by the Organization through its regional mission in supporting peace and reconstruction efforts in the Federal Republic of Somalia, and wishing success to His Excellency in his huge tasks to ensure that Somalia returns to its stability and prosperity.

In this context, His Excellency stressed the Academy’s full readiness to provide all forms of intellectual and juristic support to the Federal Republic of Somalia, particularly in the fight against extremist ideology that fuels terrorism and spreads extremism, and calls for brutal attacks on life, and public and private property based on false concepts and false interpretations of sacred texts. His Excellency also praised the outstanding role played by many contemporary scholars and thinkers of the Federal Republic of Somalia in the Horn of Africa, in promoting a culture of moderation, tolerance and coexistence, and rejecting extremism, intolerance, and terrorism, and confirmed to His Excellency the Academy’s readiness to strengthen close cooperation with scientific institutions and centers and juristic councils in Somalia. This can be achieved by partnering in conferences, seminars, and workshops with Somali scholars on ways to dismantle the origins of extremist ideology, and to break the intellectual foundations on which extremism is based, as well as to refute the premises on which they are based to implicate many young people, women, and children in committing heinous acts that have nothing to do with Islam and against its teachings.

For his part, His Excellency the Ambassador expressed his thanks and appreciation to his Excellency the Secretary General for his good reception and warm welcome, praising the great role played by the Academy and its great efforts in combating all forms of extremism, violence, terrorism and spreading the values of tolerance and moderation. His Excellency also praised the readiness of the Academy to strengthen its cooperation and partnership with the leading and long-standing Somali scientific institutions in integrating efforts and coordinating visions to strengthen the approach of moderation, and to fight extremism and violence by organizing specialized seminars and workshops on various issues of concern to Muslims in the Horn of Africa in general and in the Federal Republic of Somalia in particular.

The meeting was attended by H.E. Engineer Abdullah Abdullah Ali, Deputy Director General of the Regional Mission of OIC in Somalia, Dr. Abdel Fattah Mahmoud Abnauf, Director of Planning and International Cooperation Department at the Academy, and Mr. Mourad TLiLi, Advisor to the Secretary General of the Academy for Media and Public Relations. 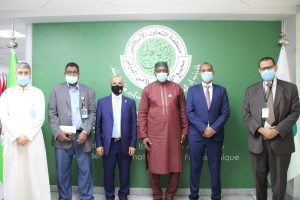 His Eminence Dr. Muhammad Mustafa Shuaib represents IIFA in the arbitration of the International Competition for Memorizing the Holy Qur’an in Kazan – Russia

the Sudanese Minister of Religious Affairs and Awqaf Visits IIFA