His Excellency Dr. Saleh bin Suleiman al-Wohaibi, Secretary General of the World Assembly of the Muslim Youth (WAMY), visited on Thursday 02 of Rajab 1443H, corresponding to 03 February 2022G, the headquarters of the General Secretariat of the International Islamic Fiqh Academy (IIFA) in Jeddah.

His Excellency Prof. Koutoub Moustapha Sano, Secretary General of the Academy, welcomed his respectable guest and his delegation, thanking him for his visit, and praising the outstanding efforts of WAMY at all levels, and highly appreciated the respect the resolutions and recommendations of the Academy receive at WAMY, especially those issued by the Academy around Waqfs and donations. He concluded by hoping that this visit marks the beginning of a new phase of close cooperation, promising partnership, and permanent coordination between the Academy and the WAMY in the field of research and organizing seminars, conferences and workshops on various issues related to Muslim youth. 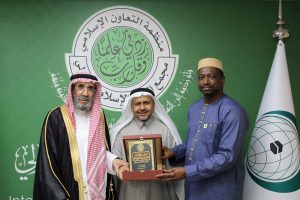 For his part, His Excellency the Secretary General of WAMY expressed his great pleasure and gratitude to His Excellency IIFA Secretary General for his warm welcome and good reception, praising the leadership role played by the Academy in the field of guidance on major issues of concern to all Muslims within and outside the Muslim world. His Excellency also stressed the keenness of WAMY to benefit from the resolutions of the Academy and its recommendations on the subject of Waqf and donations of all kinds, believing that they are well thought, and right resolutions as issued by top caliber scholars and jurists of the Ummah and enjoy unanimous approval.

Given the rapid developments and changes taking place in the world today in the economic and social spheres, there is a great need to keep pace with the jurisprudence of these developments and changes in order to guide through research on the topic of types of Waqf and emerging issues in the waqf issue, especially cash Waqf and temporary Waqf in an extensive and exhaustive manner. Accordingly, the Secretary General of WAMY proposed organizing a specialized scientific symposium in the coming months to study this subject and come up with new recommendations to be put to the Council of the Academy for adoption during its next 25th Session. 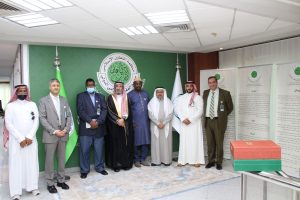