His Excellency Prof. Koutoub Moustapha Sano, Secretary General of the International Islamic Fiqh Academy (IIFA), received His Excellency Mr. Yasser Ahmed Siddiq, Acting Consul General of the Republic of Sudan in Saudi Arabia on Wednesday 06 Shaaban 1443H corresponding to 09 March 2022G, at the Headquarters of the General Secretariat of the Academy in Jeddah.

His Excellency welcomed his honorable guest and thanked him for the visit and expressed his gratitude and appreciation to the Republic of Sudan for its support and care for the Academy from its inception to the present day. He then gave his excellency a brief overview of the activities of the Academy and the developments it witnessed in the recent period, noting the Academy’s keenness to adhere to the method of moderation and spread the culture of moderation, tolerance, and coexistence in the world, as well as its relentless pursuit of unity of position, and of the Ummah. 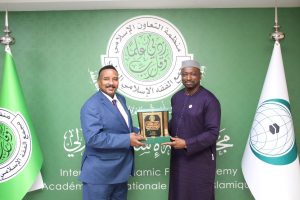 His Excellency also praised the outstanding services provided by the Republic of Sudan through the contributions of some of its most prominent scholars, led by His Eminence the leading Maliki jurist Sheikh Rafik al-Dharir, former member of the Academy, and His Eminence Dr. Ahmed Khaled Babakr, former Secretary General of the Academy, and many others. His Excellency concluded by expressing his thanks and appreciation to the Sudanese Islamic Fiqh Academy, which signed a cooperation agreement with the Academy months ago, stressing the importance of this agreement because it includes an action plan and follow-up on the aspects of cooperation, communication, and coordination between the two institutions. Meantime, the Secretary General of the Academy welcomes the idea of signing a partnership agreement and cooperation with the prestigious academic institutions in Sudan, such as the International University of Africa.

For his part, His Excellency the Ambassador expressed his pleasure and honor to visit the Academy expressing his gratitude to his Excellency the Secretary General for the good reception and welcome, stressing his keenness to establish strong and sustainable relations with the Academy and benefit from it in the service of many issues that concern Sudan and the Muslim world in general. His Excellency also expressed his admiration and appreciation for the important developments witnessed by the Academy at all levels since his Excellency began his duties as Secretary General of the Academy, especially the relations of partnership and cooperation that are constantly built with the ancient and well-established juristic and scientific institutions in the Muslim world. His Excellency also added that he hopes that his Excellency the Sudanese Minister of Awqaf and Religious Affairs will visit the Academy during his official visit to the Kingdom of Saudi Arabia as a sincere expression from the Sudanese government about the status of the Academy and in recognition of its efforts in spreading moderation and tolerance.

The meeting was attended by Dr. Abdel Fattah Abnauf, Director of the International Cooperation and Planning Department at the Academy , and Mr. Mourad Tlili, Advisor to the Secretary General for Media and Public Relations at the Academy. 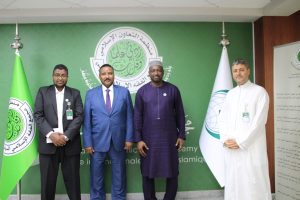