At the invitation of His Excellency Mr. Youssef Khalawi, Secretary General of the Al Baraka Islamic Economic Forum, His Excellency Prof. Koutoub Moustapha Sano, Secretary General of the International Islamic Fiqh Academy (IIFA), chaired on Thursday 20 Ramadan 1443H corresponding to 21 April 2022G, the fifth session of Sessions of the 42nd session of the Al-Baraka Symposium on the Digital Economy and Future Challenges, which was held in Al-Madinah Al-Munawara, Kingdom of Saudi Arabia. The title of the session was “The Digital Economy from Islamic Shariah Perspective”.

His Excellency commenced the session by making a fundamental note about the word “Islamic Sharia” stressing that it is a common mistake in our era to add the description “Islamic” to Shariah, given that Shariah automatically means the teachings, values, principles and provisions of Islam, and therefore there is no need to describe it as Islamic. In other words, Shariah cannot be non-Islamic, which means that describing Shariah as “Islamic” is a redundant description that is not needed at all, and the matter in this is the same as in many of the terms used in the present era, such as the terms prayer, fasting, zakat, and Hajj, and others. These terms do not need to describe “Islamic” because they are all Islamic in structure and meaning, and they do not need to describe any of them as Islamic, so it is not said, for example: Islamic prayer, Islamic fasting, or Islamic zakat. It has been settled that Shariah is not described as Islamic in the English and French languages, where the word Sharia (Shariah = Charia) is sufficed, and the description of Islamic is not added to it. 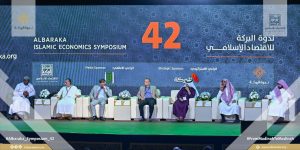 His Excellency then spoke about the importance of the symposium’s topic in general, which is the digital economy, and about the title of the special session, which is the digital economy from the perspective of Shariah, pointing to the importance of stating the Shariah position of this newcomer in the world of economics, and praising the selection of the organizers of the Al Baraka Islamic Economic Forum for this topic as a title for this session since it is a vital, modern, and important topic that should be given a part of rooting, editing and investigation. His Excellency also noted the importance of researchers in Islamic economics benefiting from all the modern mechanisms, means and tools available to advance the Islamic economy in thought and application, and to enable it to keep pace with the times, confront challenges, and seize the opportunities.

His Excellency concluded by giving an introductory overview of the Academy, explaining to the audience the stable scientific status of the Academy in this era as the largest scientific institution for contemporary collective ijtihad, and as the supreme and first Shariah reference for the member states of the Organization of Islamic Cooperation (OIC) and Muslim Communities, because it is the only scientific Academy whose members are composed of senior jurists and scholars of the eight Islamic schools of thought, and its resolutions are binding to the member states of the OIC. Hence, the Academy looks forward to issuing important recommendations from this session that will be presented to the next session of the Council of the Academy with the aim of issuing resolutions from them that will be unanimously accepted and approved by the jurists and scholars of the age.

In this session, spoke His Eminence Dr. Muhammad Qirat, Professor of Jurisprudence of Transactions from the Faculty of Shariah in Fez, who concluded in his paper that the digital economy is included in the means and tools, and therefore, the provisions of the means apply to it. Dr. Alija Avdokç from the University of Dundee, United Kingdom, spoke about the importance of paying attention to the outcomes and implications of contracts, transactions, and sales, calling for the need to look at the issue of the digital economy from this point of view. Then His Eminence Dr. Abdul Azim Abu Zaid from Khalifa bin Hamad University in Doha spoke about artificial intelligence and the Shariah rulings related to it, noting the importance of caution and precaution against many contracts and transactions that violate the provisions of Shariah and conflict with the partial purposes in transactions. As for Dr. Ali Abu Al-Ezz of the Jordan Islamic Bank, he discussed in his paper the Shariah controls that must be available in electronic commerce, and stated that these controls aim to preserve rights, and save money from manipulation and loss. At the conclusion of the session, Prof. Youssef Al-Shubaily and Dr. Nabil Al-Luhaidan commented on the papers of the speakers, explaining the importance of differentiating when considering this new type of economy between being a subject of contracts and transactions, such as smart contracts and encrypted digital currencies, and that this economy is a contemporary tool for completing contracts and transactions.

His Excellency concluded the session by calling for more attention to this topic, study, rooting, editing and investigation, in order to enable the ordinary Muslim to absorb it and benefit from its positives in a focused manner. He also called for the necessity of being open to new means and tools, contracts, and newly developed transactions, and working to correct them, direct them and rationalize them instead of rejecting them and fearing them without evidence. Every useful new arrival is therefore welcome, and every harmful new arrival should be treated with caution.