At the beginning of his speech, His Highness expressed his thanks to His Excellency the Secretary General for the visit, and he also expressed his happiness to meet His Excellency, for whom he has all the love, appreciation, and good memories, praising the importance of concerted efforts to spread the approach of moderation, a culture of pacifism, tolerance, noble values, ​​and correct concepts about Islam. His Highness also noted the importance of working to spread useful knowledge, preserve the Ummah’s heritage, train youth to be proud of belonging to their religion and their countries, and preserve the values ​​and virtues in society.

Then His Highness concluded his speech by expressing his readiness to provide all support and assistance to the Academy to enable it to perform its duties as required.

For his part, His Excellency the Secretary General expressed to His Highness his great thanks and appreciation for the warm welcome, praying to God to preserve and bless him. He also expressed the Academy’s abundant thanks and great gratitude as presidency, general secretariat, members, and experts, for the United Arab Emirates in general and for the Emirate of Sharjah in particular for the continuous support and permanent sponsorship of the activities and programs of the Academy, noting that the Emirate of Sharjah hosted one of the twenty-four sessions of the Academy, confirming the status of the Academy in the Emirate. Then His Excellency presented to His Highness a brief summary of the Academy and its strategic plan, which includes a formulation of the most important activities and programs that the Academy intends to accomplish during the next five years, noting in this regard the Academy’s commitment to moderation and pacifism in its resolutions and recommendations. His Excellency concluded his speech by thanking His Highness for the care, attention and concern he attaches to science, scholars, thought and thinkers, asking God to entrust him with the consideration of his care, and reward him for all this with the best of rewards.

During the visit, His Excellency took an introductory tour of a collection of rare historical documents, maps, books, and photos. 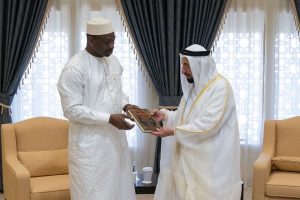