His Excellency Prof. Koutoub Moustapha Sano, Secretary General of the International Islamic Fiqh Academy (IIFA), received in his office at the headquarters of the General Secretariat of the Academy in Jeddah on Wednesday 25 Safar 1444H corresponding to 21 September 2022G, His Excellency Mr. Abdassamad El Yazidi, Secretary General of the Supreme Council of Muslims in Germany.

His Excellency welcomed the honorable guest, thanking him for this first visit of its kind of one of the most important Islamic councils in Muslim communities of Europe, and congratulated him on his recent re-election for a second term as Secretary General of the Council, wishing him and his colleagues further success in serving Islam and Muslims in Germany. His Excellency also assured his guest of the Academy’s keenness to coordinate, cooperate and communicate with moderate Islamic institutions, councils and centers within the countries of Muslim communities, noting that the Academy is ready to harness all its scientific and intellectual capabilities to serve the issues of Muslim communities, and to provide effective solutions and satisfactory answers to calamities and issues that concern them, in the hope that they become a link between the Muslim world and their societies for the benefit and good of all. To achieve this, His Excellency expressed the Academy’s readiness to conclude a cooperation agreement with the Council that would be the basis for fruitful cooperation and a strategic partnership between the two parties in various intellectual and scientific fields, in order to enable the Council to make maximum use of the Academy’s wise resolutions that call for moderation, spread a culture of moderation, tolerance and coexistence, and adhere to the requirements of citizenship within societies. His Excellency concluded by welcoming the joint organization of conferences and seminars in partnership with the Council on various calamities and issues of concern to Muslim communities in the West in general and in Germany in particular. 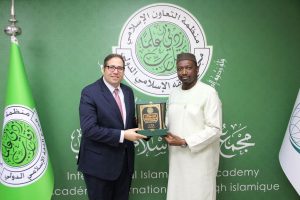 For his part, His Excellency Mr. Abdassamad El Yazidi expressed his great pleasure and great gratitude for this good opportunity to visit the Academy and meet with His Excellency the Secretary General, because of his and the Academy’s global scientific reputation and wide appreciation inside and outside the Muslim world. His Excellency stressed the keenness of the Council and German Muslims in general to consolidate the bonds of cooperation and coordination with the Academy to serve a number of important goals at the same time, which is the development of the academic staff of the Council including imams and preachers, and the organization of joint scientific seminars and conferences inside Germany for the benefit of all Muslims there, in addition to the participation of German Muslim religious scholars in the Academy’s activities, especially in the Annual Session, and benefit from the rich and valuable scientific research that the Academy constantly issues. In this context, His Excellency extended an official invitation to His Excellency the Secretary General to visit the Federal Republic of Germany and closely review the conditions of Muslims there and to witness the great efforts made by the Council to serve the Muslims of Germany.

The meeting was also attended by Mr. Mohamed Mondher Chouk, Director of the Cabinet Affairs Department at the Academy, Dr. Alhagi Manta Drammeh, Head of the International Cooperation and External Relations Division at the Academy, and Mr. Mourad TLiLi, Adviser to His Excellency the Secretary General for Media Affairs and Public Relations. 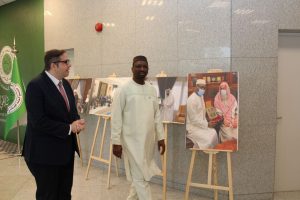