His Excellency Prof. Koutoub Moustapha Sano, Secretary General of the International Islamic Fiqh Academy (IIFA), received His Excellency Dr. Mohammed Al-Khalayleh, Minister of Awqaf Islamic Affairs and Holy Places in the Hashemite Kingdom of Jordan, and his accompanying delegation on Wednesday 18 Jumada II 1444H corresponding to 11 January 2023G, at the headquarters of the General Secretariat of the Academy in Jeddah, as part of a courtesy visit on the sidelines of the Jordanian delegation’s participation in the Hajj Expo 2023 organized by the Ministry of Hajj and Umrah in the Kingdom of Saudi Arabia.

His Excellency Dr. Mohammed Al-Khalayleh expressed his thanks and gratitude to His Excellency the Secretary General for the good reception and warm welcome, praising the keenness of the Academy under his leadership to serve Muslims in all parts of the world by finding appropriate Shariah solutions to the problems they face, especially during their performance of the rituals of Hajj and Umrah. In this context, His Excellency suggested that specialized seminars be held to study a number of calamities and developments of Hajj and Umrah in light of the successive changes and developments, with the aim of issuing resolutions that facilitate for Muslims the performance of their rituals and relieve them of the unusual hardship. His Excellency also took advantage of the opportunity to extend an official invitation to His Excellency the Secretary General to visit Jordan during the coming month of Ramadan to participate in the Hashemite Scientific Councils series organized by the Ministry. 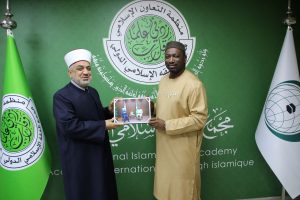 For his part, His Excellency the Secretary General welcomed His Excellency the minister, thanking him for this kind visit, and expressing his gratitude and appreciation to His Excellency for his keenness to constantly communicate with the Academy and coordinate with it on many issues and topics of concern to Muslims, especially with regard to the rituals of Hajj and Umrah. His Excellency stressed the necessity of issuing new Academy’s resolutions on many calamities and developments related to the rituals of Hajj and Umrah, in order to enable the pilgrims to perform them easily. His Excellency also took the opportunity to praise the new measures announced by the Saudi Ministry of Hajj and Umrah, led by His Excellency Minister Dr. Tawfiq Al-Rabiah, during the Hajj Expo 2023, which would make the Umrah and Hajj experience much easier for Muslims and at a lower cost. These procedures are in addition to what the Kingdom of Saudi Arabia has provided in terms of distinguished services and great care for pilgrims over the years.

In conclusion, the two parties agreed to continue consultation and discussion on the issue of holding a specialized symposium on Hajj and Umrah. His Excellency also agreed to accept the invitation to visit Jordan and participate in the Hashemite Scientific Councils series during the coming month of Ramadan. 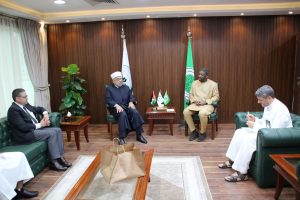