His Royal Highness Prince Khaled Al-Faisal, Advisor to the Custodian of the Two Holy Mosques, Governor of Makkah Province, received His Excellency the Secretary General of the International Islamic Fiqh Academy (IIFA), Prof. Koutoub Moustapha Sano, and his accompanying delegation, at his office in Jeddah on Monday 07 Jumada II 1443H corresponding to 10 January 2022G.

His Royal Highness welcomed His Excellency the Secretary General, expressing his happiness at receiving the delegation of the Academy, and his appreciation for the role played by the Academy in spreading moderation and a culture of tolerance. His Highness also stressed the need for concerted efforts to promote a culture of moderation and combat radicalism, fanaticism, and extremism.

For his part, His Excellency the Secretary General expressed his great thanks and great gratitude to His Royal Highness for this great honor and for the warm reception and earnest welcome to him and the delegation of the Academy and conveyed to His Highness the greetings of His Excellency the President of the Academy, Sheikh Dr. Saleh bin Abdullah bin Hamid, Advisor to the Royal Court, member of the Board of Senior Scholars, Imam of the Grand Mosque of Makkah, and all the staff of the Academy, including members, experts and employees.

Furthermore, His Excellency presented to His Highness a brief summary of the mission of the Academy represented in a moderate presentation of Shariah, highlighting its advantages, and its ability to achieve happiness and stability for the individual and society, praising in this regard the Academy’s continuous efforts to correct misconceptions and stereotypical image of Islam. His Excellency also stressed the keenness of the Academy on intellectual convergence and knowledge integration between the scholars of the Ummah and the scholars of the reputable Islamic schools of jursiprudnece, in addition to the diligent work in order to coordinate with the fatwa bodies, the bodies of senior scholars within the Muslim world, and Muslim communities. On this occasion, His Excellency pointed out that the Academy does not issue fatwas on issues of local nature, and also indicated that the Academy does not address controversial issues, in an effort to unite the Ummah’s word and unite its ranks.

Praise be to God, the Academy was able, thanks to the support of the host state in particular and the member states of the Organization in general, to hold twenty-four (24) Sessions, and to issue two hundred and thirty-eight (238) Resolutions on various issues and developments in economy, thought, culture, and education. Finally, His Excellency concluded his speech by expressing his aspiration to strengthen cooperation, coordination and communication with scientific and religious institutions concerned with managing religious affairs in the Kingdom of Saudi Arabia. 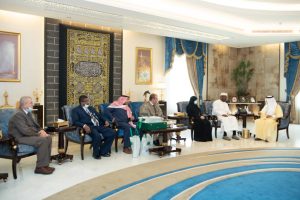