As part of the international Islamic Fiqh Academy’s (IIFA) quest for cross-fertilisation of ideas and knowledge integration between the leading scientific institutions in the member states of the Organization of Islamic Cooperation (OIC), and a desire to benefit from the experiences of prestigious universities and scientific institutes inside and outside the Muslim world, His Excellency Prof. Koutoub Moustapha Sano, Secretary General of the Academy, and His Excellency Prof. Enver Gicic, Dean of the Faculty of Islamic Studies of the Republic of Serbia, signed a strategic cooperation agreement between the two institutions on Wednesday, 23 Jumada II 1443H, corresponding to 26 January 2022G, at the Headquarters of the General Secretariat of the Academy in Jeddah, the Kingdom of Saudi Arabia.

This agreement aims to build a strategic partnership in the field of mutual utilization of the scientific and research capabilities of the two institutions, and to study contemporary issues to guide and direct them. The agreement also aims to jointly organize conferences and seminars, hold workshops and training, exchange publications, and represent the two sides in the conferences and seminars held by each other in the field of mutual interest.

Following the signing of the agreement, His Excellency the Secretary General expressed his pleasure at the development and progress witnessed by the Faculty, and the scientific results and achievements of the Faculty in recent years at the level of the formation of distinguished religious cadres to serve Muslims in the region, noting that this agreement will be an opportunity to invite researchers at this Faculty to participate in the courses, seminars and conferences of the Academy, in addition to scientific, academic and research cooperation in order to allow the academic staff of the Faculty and graduates to have more grounding in their disciplines.

For his part, His Excellency the Dean of the Faculty expressed his pleasure at the completion of this agreement, which will allow the faculty to use the capabilities and expertise of the Academy, which will benefit directly at the level of the educational and training outputs of the faculty and its ability to attract more students. His Excellency added that he looks forward to the support of the Academy to the faculty, proposing to hold a specialized seminar in partnership with the Academy, which will focus on the issues and concerns of Muslim communities in the Balkans.

In accordance with the terms of the memorandum, the parties agreed to form a specialized committee that would identify their cooperation, methods, and mechanisms of implementation as enshrined in the memorandum itself, and the Committee has the mandate to benefit from the expertise of whom they deem appropriate to implement all the provisions of the memorandum.

The meeting was attended by Dr. Omar Zuhair Hafez, Special Advisor to the Secretary General, Mr. Mohamed Al-Mondher El-Chouk, Director of the Department of Cabinet and Protocol Affairs at the Academy, Dr. Abdel Fattah Abinauf, Director of the Department of Planning and International Cooperation at the Academy, and Mr. Mourad TLiLi, Media Advisor to the Secretary General. 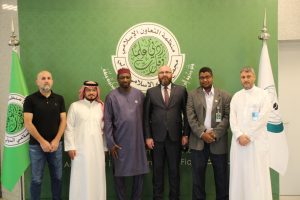