In the context of the International Islamic Fiqh Academy’s (IIFA) active efforts to strengthen the relations of cooperation and strategic partnership with the scientific, religious and research institutions within the member states of the Organization of Islamic Cooperation (OIC), and the eagerness of the General Secretariat of the Academy to update the member states of the Organization on the activities of the Academy, its programs, and projects, especially its recent strategic plan, His Excellency Prof. Koutoub Moustapha Sano, the Secretary General of the Academy, visited His Excellency the Mauritanian Prime Minister Mohamed Ould Bilal Massoud, on Thursday 09 of Rajab 1443H, corresponding to 10 February 2022G, in his office at the Prime Minister’s Headquarters in Nouakchott.

His Excellency the Prime Minister welcomed his guest and companion, thanked him for the visit, and for his participation in the second African Conference to promote peace held in Nouakchott, praising the esteemed efforts of the Academy to promote moderation, and the culture of tolerance and coexistence. His Excellency then praised the role of the Academy in the fight against extremism, radicalization, intolerance and terrorism, noting in this regard the aspiration of the Islamic Republic of Mauritania for the support of the Academy to the efforts of the organizers of the Second African Conference to promote peace currently taking place in Nouakchott, as the objectives of that conference are included in the important objectives of the Academy, which requires the integration of efforts and coordination between them. His Excellency concluded by emphasizing his government’s continued support and care required for the General Secretariat of the Academy to enable it to carry out its activities and programs, and to strengthen the permanent partnership between the Academy and all Mauritanian scientific and religious institutions. 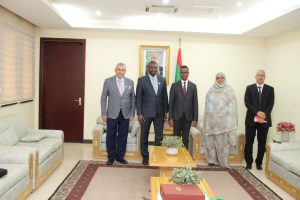 In the meantime, the Secretary General expressed the Academy’s full readiness to strengthen cooperation and communication with all religious and scientific authorities in Mauritania in various fields with the aim of coordinating efforts and organizing programs, conferences and activities aimed at promoting peace and stability and combating extremist ideology, all forms of violence, extremism, intolerance and terrorism, as well as the Academy’s willingness to cooperate with the Mauritanian authorities in order to highlight Mauritania’s successful model of strong integration between security and intellectual approaches in the fight against extremism and terrorism.

The meeting was attended by the Director of the Office of the Prime Minister, Ms. Aish Fal Fergas, the Advisor in charge of Islamic Affairs of the First Ministry, Mr. Ahmed Salem Ould Miabah, and Mr. Amjad al-Mansi, Head of the Protocol Division at the Academy.