In the context of strengthening relations of cooperation and partnership between the International Islamic Fiqh Academy (IIFA) and the authorities in charge of maintaining religious affairs and supervising the issues of Muslims outside the Islamic world, a delegation from the State Department of the United States of America headed by the Special Envoy for Afghan Women, Girls, and Human Rights, Mrs. Rina Amiri accompanied by her advisor Ms Roushani Mansoor, Control Officer Ms Laura Marsalisi, and Political and Economic Section Chief at the Consulate General of the United States of America in Jeddah Mr Allen Krause, visited the Academy on Thursday 16 Rajab 1443H corresponding to 17 February 2022.

On her arrival, the delegation was greeted by Mrs. Sarah Amjad Hussein, Director of Family and Women’s Affairs at the Academy, who welcomed them and expressed, on behalf of His Excellency the Secretary General of the Academy, the Academy’s gratitude to the delegation for the visit. She also expressed her appreciation to the Consulate General for facilitating the visit.

For her part, the Special Envoy expressed her pleasure for visiting the Academy, and her great appreciation for its commendable efforts in correcting practices under which many of the legitimate rights granted by Shariah to women are violated, whether in the fields of thought, society, economy, culture, and politics. She also expressed her appreciation for the important role of the Academy in promoting awareness of the necessity of empowering women to participate in the efforts of construction, progress, and development in the Muslim world, praising the Academy’s successful resolutions related to women’s education, female circumcision (FGM), underage marriage, women’s work, and other issues.

She then concluded her speech by expressing her aspiration for the Academy’s success in its efforts to convince the new authorities in Afghanistan to enable Afghan women to study and work. Then the two sides discussed aspects and areas of cooperation between the Academy and the office of the Special Envoy for Women’s Affairs on various issues of common interest.

At the end of the visit, the Director of Family and Women’s Affairs presented a copy of the Academy’s book of Resolutions and Recommendations in English to her guest and the accompanying delegation. 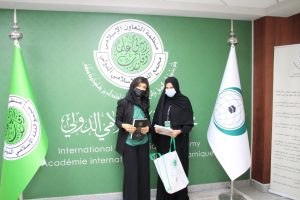