His Excellency Prof. Koutoub Moustapha Sano, Secretary General of the International Islamic Fiqh Academy (IIFA), received on Tuesday 04 Ramadan 1443H corresponding to 05 April 2022G, His Eminence Dr. Youssef Al-Khalawi, Secretary General of the Islamic Chamber of Commerce, Industry and Agriculture at the headquarters of the General Secretariat of the Academy in Jeddah.

At the beginning of the meeting, His Excellency welcomed his honorable guest, thanking him for the visit, and expressing his appreciation for the efforts of the Islamic Chamber in coordinating between the Islamic Chambers of Commerce, Industry and Agriculture within the member states of the Organization of Islamic Cooperation (OIC). His Excellency also expressed his great gratitude for the distinguished efforts of the Al Baraka Islamic Economic Forum in promoting awareness of the status and importance of the Islamic economy and its ability to provide effective solutions to the economic problem in the world, based on the eternal Islamic values and principles and based on the established legitimate purposes for orientation and guidance.

Proceeding from the mission of the Academy embodied in presenting Shariah in a correct and moderate manner by highlighting its advantages and its full ability to address the problems of contemporary life, and a desire to achieve one of the most important goals of the Academy represented in coordinating between fatwa bodies, juristic bodies and Islamic councils in the Muslim world and outside of it in order to avoid contradictions and conflicts. Therefore, His Excellency expressed his aspiration to enhance cooperation, coordination and partnership between the Academy and the Islamic Chamber on the one hand, and between the Academy and the Al-Baraka Forum for Islamic Economy on the other , especially with regard to organizing specialized seminars, scientific conferences and workshops on calamities and economic developments in order to shed light on the Shariah provisions appropriate to them in a systematic and scientific methodology, with the aim of providing Islamic solutions to the problems of life, especially calamities, developments, and successive and escalating economic changes.

For his part, His Eminence Dr. Al-Khalawi expressed his great thanks and great appreciation for the warm welcome, praising the qualitative shift and the great changes that took place in the headquarters of the General Secretariat in terms of organization and planning, which is gratifying and calls for optimism for a prosperous future for the Academy. His Eminence also expressed his gratitude and welcome to all aspects of cooperation and partnership possible between the Academy and the Al-Baraka Forum for Islamic Economy on the one hand, and between the Academy and the Islamic Chamber of Commerce and Industry on the other , noting the importance of coordination and integration between scientific institutions that are active in the field of Islamic economics, and the need for concerted efforts in order to avoid repetition and unwanted competition. Furthermore, His Eminence spoke about the next session of the annual Al Baraka Symposium to be held between 19-20 of Ramadan in Madinah under the patronage of His Royal Highness Prince Faisal bin Salman bin Abdelaziz Al Saud, Governor of the Madinah Region, calling on this occasion His Excellency to participate in the symposium and chair one of its sessions that will address the digital economy and artificial intelligence. His Eminence also welcomed the idea of ​​signing a cooperation and partnership agreement between the Academy and the Al Baraka Islamic Economic Forum on the sidelines of the symposium, which includes specific areas of cooperation with the means of implementation. To this end, His Excellency directed the Department of Planning and International Cooperation at the Academy to prepare a draft of the aforementioned areas of agreement and present it to the Forum before the symposium for approval.

At the end of the meeting, His Eminence reiterated his thanks to His Excellency for the warm welcome, for the new edition of the book of Resolutions and Recommendations of the Academy in Arabic and English, and for some distinguished publications of the Academy.

The meeting was attended by Dr. Abdel Fattah Abnauf, Director of the Planning and International Cooperation Department at the Academy. 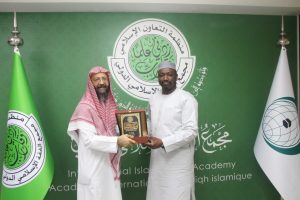