His Excellency Prof. Koutoub Moustapha Sano, Secretary General of the International Islamic Fiqh Academy (IIFA), welcomed His Excellency Ambassador Amjad Hussein Badewi, Director of the Office of the Muslim World League in Paris, France, on Monday, 10 Ramadan 1443H corresponding to 11 April 2022G, in his office in the General Secretariat of the Academy in the city of Jeddah.

His Excellency began the meeting by expressing his thanks to his guest for visiting the Academy, and also congratulating him on the distinguished and remarkable role played by the League’s office within the French Republic in the field of strengthening cooperation and communication between members of Muslim communities, and spreading the culture of moderation, tolerance and peaceful coexistence in France, as well as supporting constructive dialogue between followers of religions in the European continent in general and in France in particular.

On the other hand, the Secretary General informed his guest about the visit of a delegation from the Academy to France in the very near future, in order to discuss with the French authorities a number of issues of concern to Muslims in France, and in support of the commenedable and successful efforts of the League’s office in France.

At the end of the meeting, His Excellency presented his guest with souvenirs, including a copy of the Book of Resolutions and Recommendations in Arabic, English and French, and a number of issues of the monthly newsletter. 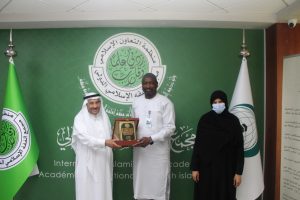