Under the patronage of His Royal Highness Prince Saud bin Khalid Al-Faisal, Deputy Governor of Al-Madinah Al-Munawara Region, and His Excellency Sheikh Abdullah Saleh Kamel, Chairman of the Board of Trustees of Al-Baraka Forum, and on the sidelines of the 42nd Al-Baraka Symposium held in Al-Madinah Al-Munawara, on Tuesday 18 Ramadan 1443H corresponding to 19 April 2022G His Excellency Prof. Koutoub Moustapha Sano, Secretary General of the International Islamic Fiqh Academy (IIFA), and H.E. Youssef bin Hassan Khalawi, Secretary General of the Al Baraka Islamic Economic Forum, signed a memorandum of strategic cooperation between the Academy and the Forum to foster continuous and fruitful cooperation in all fields and common issues.

This agreement aims to build a strategic partnership between the two parties in the field of supporting the scientific and research capabilities and abilities of the two institutions, deepening the areas of cooperation between them to confront contemporary issues, and excel in the creation, development, dissemination and application of knowledge to enrich the lives of individuals and societies, and dealing with contemporary issues related to charitable and humanitarian work and the dissemination of knowledge and Islamic culture and preservation of the Islamic cultural heritage. The memorandum also aims to enhance cooperation and continuous communication, and to strengthen coordination between the two institutions in the areas of organizing conferences and symposia, holding workshops and training, exchanging publications, and representing the two sides in the conferences and symposia that are held by each in the field of common interest between them. 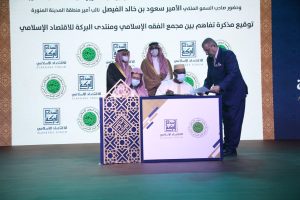 After signing the memorandum, His Excellency the Secretary General of the Academy expressed his pride in this cooperation and hoped that this memorandum would be the beginning of a new phase in the strong and sustainable cooperation relations between the Academy and the Forum in order to coordinate efforts and provide effective solutions to calamities and developments, especially in the field of economy. His Excellency also expressed his hope to develop databases that serve the areas of joint work, and to make optimal use of the Forum’s specialized database staff. His Excellency also affirmed the Academy’s readiness to harness all its scientific and moral capabilities to serve the Forum’s agenda and enable it to achieve its noble goals inside and outside the OIC countries, praising the distinguished pioneering role of the Forum in promoting awareness of the status of the Islamic economy, and the need to benefit from the developments of the contemporary economy. His Excellency concluded by congratulating the Forum’s organizers for their pioneering and successful initiative in dedicating the current year’s symposium to studying the digital economy and forecasting the future.