His Excellency Mr. Rashad Hussein, Ambassador-at-Large of the United States of America in charge of International Religious Freedom and his accompanying delegation, paid a courtesy visit to the headquarters of the General Secretariat of the International Islamic Fiqh Academy (IIFA) on Thursday 11 Shawwal 1443H corresponding to 12 May 2022G.

Upon his arrival at the Academy, he and the accompanying delegation were received by His Excellency Prof. Koutoub Moustapha Sano, Secretary General of the Academy, who thanked him for the visit, congratulating him on his assumption of the position of Ambassador-at-Large in charge of International Religious Freedom in the United States of America, wishing him all success. His Excellency the Secretary General also expressed his thanks and appreciation to His Excellency the Ambassador for his blessed efforts in defending the rights and interests of Muslims in the United States of America, and combating extremist ideology wherever it comes from, especially Islamophobia and the attacks it causes on Muslim communities in Western countries and on relations between peoples and cultures in general. 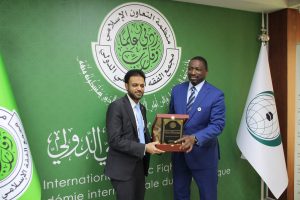 His Excellency also affirmed the Academy’s readiness to work together to enhance awareness among Muslim communities of the importance of adhering to the requirements of citizenship in their countries, and the need to respect laws and regulations while preserving their religious identity, as there is in fact no conflict between religious affiliation and loyalty to the country in which the Muslim person resides. His Excellency expressed the Academy’s readiness to organize scientific events that serve these ideas inside the United States of America directed at Muslim communities, sign cooperation agreements with the leading scientific institutions in the United States and invite Muslim American scholars to participate in the upcoming Sessions of the Academy to enrich dialogue and spread benefit.

For his part, Ambassador Rashad Hussein expressed his deep thanks and great gratitude to His Excellency the Secretary General of the Academy for the warm reception and courteous welcome, stressing his great interest and keenness to make this visit to the Academy in order to see and benefit from the contributions of the Academy in the areas of pluralism, religious tolerance and coexistence among religions and cultures and to fight and combat extremist ideology, terrorism and violence.

His Excellency added that his country’s government views with appreciation the moderate and sober thought offered by the Academy and all its commendable efforts to spread moderation and peaceful coexistence between religions, and that he looks forward to more cooperation and coordination with the Academy in order to serve these noble humanitarian goals through the joint organization of purposeful scientific events inside and outside the United States of America, and the participation of prestigious American religious institutions in the Academy’s Sessions and various scientific conferences.