On Sunday 14 Shawwal 1443H corresponding to 15 May 2022G, Her Excellency Dr. Eltje Aderhold, Special Envoy of the Federal Republic of Germany to the Organization of Islamic Cooperation (OIC) and Consul General of Germany in Jeddah, visited the headquarters of the General Secretariat of the International Islamic Fiqh Academy (IIFA). Her Excellency and the delegation accompanying her were received by Prof. Koutoub Moustapha Sano, Secretary General of the Academy, who thanked her for this visit, which is the first of its kind for a German official to the Academy since its establishment.

Her Excellency expressed her deep thanks and great gratitude to His Excellency for the warm welcome, and also expressed her aspiration to strengthen relations of cooperation and coordination with the Organization of Islamic Cooperation (OIC) and its affiliated bodies, especially the Academy, noting Germany’s keenness to consolidate partnership and joint dialogue with the OIC on a number of topics and issues of interest to both sides, and on this occasion she called on the Academy to participate in the second round of the strategic dialogue that will be held during the second half of this year in the German capital, Berlin. 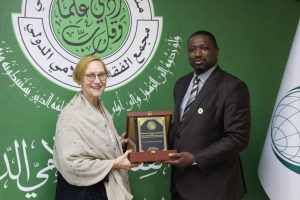 Her Excellency added that her government views with appreciation the Academy’s great efforts in spreading a culture of moderation and peaceful coexistence between religions and peoples. She also expressed her gratitude for the pioneering role of the Academy in promoting awareness of the importance of empowering women of their natural rights and allowing them to actively participate in efforts to build, progress and develop in the countries of the Muslim world, praising the Academy’s successful resolutions related to the issues of FGM, marriage of minors, and women’s work. Her Excellency also stated that she looks forward to more cooperation with the Academy in order to serve these issues, in coordination with the Department of Women and Family Affairs in the Academy to determine the topics of common interest between the two sides and work on executing them together, in addition to the joint organization of some purposeful scientific events inside and outside Germany.

In the same context, His Excellency affirmed the Academy’s readiness to enhance awareness among Muslim communities of the importance of adhering to the requirements of citizenship in their countries, and the need to respect laws and regulations while preserving their religious identity, as there is actually no conflict between religious affiliation and loyalty to the country in which a Muslim person lives. His Excellency then expressed the Academy’s readiness to participate in the second round of talks between the OIC and Germany, in addition to the Academy’s readiness to organize scientific events inside Germany targeting the Muslim community there and addressing issues and topics that concern them and the German government. His Excellency the Secretary General also touched on the subject of the Academy’s scientific delegation visiting Afghanistan during the coming period to debate with Taliban scholars and the current Afghan leadership and expressed his welcome to cooperate with the German envoy to Afghanistan in this context on Afghan issues of common interest. 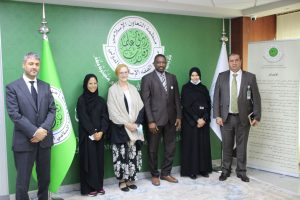