On Tuesday, 16 Shawwal 1443H corresponding to 17 May 2022G, His Excellency Dr. Abd al-Ati Ahmed Abbas, Minister of Religious Affairs and Awqaf of the Republic of Sudan, and his accompanying delegation visited the headquarters of the General Secretariat of the International Islamic Fiqh Academy (IIFA) in Jeddah. He was received by Prof. Koutoub Moustapha Sano, Secretary General of the Academy.

His Excellency the Minister thanked the Secretary General of the Academy for the kind reception and warm welcome, and expressed his great pleasure at visiting the Academy, this great scientific edifice of which the entire Muslim Ummah is proud. He also expressed his personal pride, and that of the ministry’s delegation, in the solid and fruitful relations of cooperation with the Academy, and the importance of benefiting from the capabilities and expertise of both parties in all areas of common interest. In this context, His Excellency presented a number of proposals that serve Islam and Muslims, not only in Sudan, but in the entire Muslim world. He also expressed his aspiration for His Excellency the Secretary General’s visit to Sudan to learn closely about the issues and concerns of the Sudanese Muslim and thus support and enhance the efforts of the Sudanese Ministry and Government in this regard. 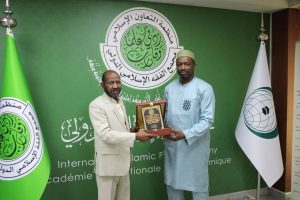 For his part, His Excellency the Secretary General welcomed His Excellency the Minister, and thanked him for this generous visit, which confirms the depth and strength of relations of cooperation, coordination and communication between the Academy, the Ministry and the leading scientific institutions in Sudan, which culminated a few months ago with the signing of a memorandum of cooperation between the Academy and the Sudanese Islamic Fiqh Academy of the Ministry. His Excellency also seized the opportunity to express the importance of initiating the implementation of the provisions of the memorandum in order to achieve the objectives stipulated in it. Then His Excellency presented his guest with a brief summary of the Academy’s vision, mission, objectives, five-year strategic plan, and its various activities and programs. His Excellency also indicated that the Academy has called for papers from a number of distinguished Sudanese researchers to participate with research papers in the upcoming Session of the Academy. His Excellency invited on this occasion the Minister to nominate more researchers to participate in the Session by preparing research and working papers on a number of topics of the Session, especially the topic of orphans, those without support, those without known parents, the phenomenon of street children and beggars, and so on. 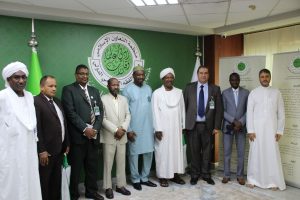