His Excellency Prof. Koutoub Moustapha Sano, Secretary General of the International Islamic Fiqh Academy (IIFA), participated in the Bahrain Forum for Dialogue: “East and West for Human Coexistence” during Thursday and Friday 9-10 Rabi’ al-Thani 1444H corresponding to 3 and 4 November 2022G, which was held under the patronage of His Majesty King Hamad bin Isa Al Khalifa, King of the Kingdom of Bahrain, and with the participation of His Eminence the Grand Imam, Professor Ahmed Al-Tayeb, Sheikh of Al-Azhar Al-Sharif, Chairman of the Muslim Council of Elders, and His Holiness Pope Francis, Pope of the Catholic Church, and in the presence of about 200 figures and leaders and representatives of religions around the world, as well as prominent intellectual and media figures. The forum was jointly organized by the Council of Muslim Elders, the Supreme Council for Islamic Affairs in the Kingdom of Bahrain and the King Hamad Global Center for Peaceful Coexistence. 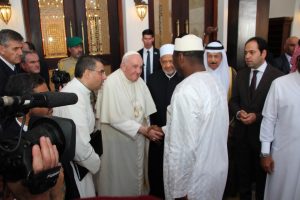 His Excellency expressed his great happiness to participate in this forum, and his honor to meet two great contemporary figures, the Grand Imam Dr. Sheikh Ahmed Al-Tayeb, and His Holiness Pope Francis, in his capacity as a member of the Muslim Council of Elders, stressing that “the holding of this forum in the Kingdom of Bahrain, represents a living and ancient model of coexistence and tolerance, which is a clear message to humanity, that the most effective solution to the tragedies, wars and conflicts that humanity is experiencing today lies in concerted efforts and integration of steps, in order to promote the values ​​and principles of peace and coexistence, acceptance and recognition of others, and enabling them to practice their rituals and beliefs completely free. The desired way out of the exceptional circumstances that humanity is going through lies in the openness of followers of religions to each other, through deep respect and practical application of the pure values ​​and noble principles that religions call for such as love, mercy, affection, cooperation, solidarity, and synergy. Therefore, the hope is that this forum, which includes a distinguished elite of all religions and beliefs, will come out with a practical application and a tangible program that will enable the achievement of what was expressed in the memorable Document on Human Fraternity for World Peace and Living Together of solid visions and solid ideas.” His Excellency concluded by asking followers of religions to stop “fighting and reprehensible disputes, and instead they should cooperate in order to achieve a sincere human brotherhood, in which arms are not raised in the face of fellow human beings, and the honor and money of fellow human beings are not attacked. Thus, the happiness, survival and prosperity of humanity depends on the promotion of the values ​​of human fraternity”.

His Excellency concluded his intervention by congratulating the Council of Muslim Elders for the successful choice of place and time of this forum, praising the Council’s possession of many innovative and creative ideas that seek to achieve the principles stipulated in the “Document on Human Fraternity ”, which humanity cannot forget, as it is one of the rare documents throughout the history of Humanity that includes principles capable of putting an end to all the exceptional circumstances that humanity is going through.

The forum was concluded under the generous patronage of His Majesty King Hamad bin Isa Al Khalifa, King of the Kingdom of Bahrain. 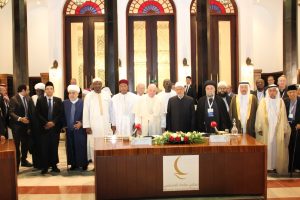