His Excellency Prof. Koutoub Moustapha Sano, Secretary General of the International Islamic Fiqh Academy (IIFA), received His Excellency Mr. Yahya Lawal, Ambassador of the Federal Republic of Nigeria to the Kingdom of Saudi Arabia and Permanent Representative of Nigeria to the Organization of Islamic Cooperation (OIC), on Sunday 12 Rabi’ Al Thani 1444H corresponding to 06 November 2022G at the headquarters of the General Secretariat of the Academy in Jeddah, Kingdom of Saudi Arabia.

His Excellency the Secretary General welcomed His Excellency the Ambassador and thanked him for this first visit to the headquarters of the General Secretariat of the Academy. He also expressed the gratitude of the Academy and its great appreciation for the support and care it has received since its establishment from the Government of the Federal Republic of Nigeria, hoping that this visit will be an opportunity to inform His Excellency on the vision of the Academy, its mission, goals, projects, and its five-year strategic plan, which includes a clear illustration of all the activities and programs that it intends to implement during the next five years. He also expressed his gratitude for the Ambassador’s keenness to strengthen relations of cooperation and coordination between Nigeria and the General Secretariat of the Academy. His Excellency then gave the guest a brief overview of the qualitative changes that the General Secretariat of the Academy is witnessing after assuming the duties of the Secretary General, requesting the permanent delegates to the OIC to appeal to their countries to continue supporting the Academy, and support its strategic plan in particular, to enable it to carry out its intellectual responsibility of promoting the approach of moderation, and spreading a culture of moderation, tolerance, coexistence and harmony between followers of religions and sects, and rejection of extremism, fanaticism, terrorism and violence in all its forms. 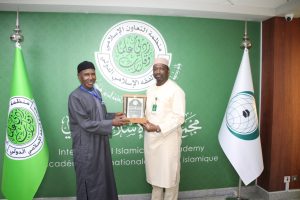 For his part, the ambassador expressed his great pleasure at visiting the Academy and his thanks and appreciation to His Excellency the Secretary General for the good reception and warm welcome, stressing his country’s keenness to establish strong and sustainable relations with the Academy and to benefit from its extensive scientific expertise in the face of many religious, intellectual and social issues that preoccupy Nigerian society and the West African region generally. His Excellency also expressed his hope to strengthen relations of cooperation and communication between the General Secretariat of the Academy and the State of Nigeria in the field of organizing joint scientific events inside and outside Nigeria, in addition to strengthening close cooperation between scholars and experts of the Academy and Nigerian scholars in order to support the Nigerian government’s efforts in the field of combating extremist ideology, terrorism, and intolerance. He also expressed his deep appreciation for the qualitative changes and remarkable developments that the Academy’s General Secretariat is witnessing, both at the administrative level and at the scientific and intellectual level, praising His Excellency’s great keenness to Unify the Ummah’s voice and spread the correct concepts of the true religion.

The meeting was attended by Mr. Mohamed Al-Mondher El-Chok, Director of the Cabinet Affairs and Protocol Department, and Mr. Mourad TLiLi, Advisor to His Excellency the Secretary General for Media Affairs. 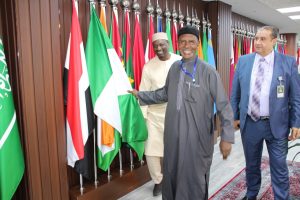