His Excellency Mr. Muhammad Samir Elnakshbandy, the new Consul General of the Republic of Iraq to the Kingdom of Saudi Arabia, and Permanent Representative of the Republic of Iraq to the Organization of Islamic Cooperation (OIC), and his accompanying delegation visited, on Tuesday 05 Jumada al-Awwal 1444H corresponding to 29 November 2022G, the headquarters of the General Secretariat of the International Islamic Fiqh Academy (IIFA) in Jeddah, Kingdom of Saudi Arabia.

His Excellency Prof. Koutoub Moustapha Sano, Secretary General of the Academy, welcomed His Excellency the Consul General and his accompanying delegation, and thanked him for this kind visit, congratulating him on his new position and wishing him every success in his duties, and appreciating his keenness to enhance the bonds of communication, cooperation and coordination between the Academy the Iraqi scientific institutions and centers that work in the field of spreading the culture of moderation, tolerance, solidarity and harmony. His Excellency also took the opportunity to express his sincere thanks and appreciation to the Republic of Iraq for its continuous support and care of the Academy since its inception to the present day. He then gave the honorable guest an overview of the activities of the Academy, its various programs, and the goals it seeks to achieve, especially with regard to combating extremism, intolerance, and terrorism, and promoting a culture of openness, acceptance of the other, and coexistence between followers of religions, beliefs, and sects, stressing on this occasion the Academy’s full readiness to provide intellectual support to all institutions of the Republic of Iraq that are active in this field, hoping to unify the voice, reunite, eliminate strife in all its forms and types, and strengthen cooperation for the advancement of the glorious Iraq. 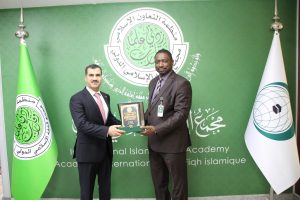 For his part, His Excellency the Consul General expressed his great pleasure and honor at visiting the Academy and his thanks and gratitude to His Excellency for the good reception and warm welcome, stressing his country’s keenness to establish strong and sustainable relations with the Academy and to benefit from it in addressing many religious and intellectual issues that concern Iraqi society, foremost of which is the topic of combating extremism and terrorism, and promoting peaceful coexistence between races and religions. He also expressed his great appreciation for the tremendous efforts made by His Excellency the Secretary General, praising in particular His Excellency’s great keenness to unify the voice of the Ummah, and to spread the values of moderation and tolerance. He also expressed Iraq’s desire and keenness to strengthen relations of cooperation and communication between the Academy, Iraqi scholars and religious leaders of all denominations, in support of the efforts of the Government of Iraq in combating intolerance, extremism and terrorism.

His Excellency concluded by presenting an official invitation from the Republic of Iraq to His Excellency the Secretary General to visit Baghdad as soon as possible and to meet with political leaders and religious figures there in order to support their continuous efforts in preserving the unity, security and safety of Iraqi society and spreading the lofty principles of our true religion on tolerance and peaceful coexistence between religions and peoples.

The meeting was attended on the Iraqi side by His Excellency the Deputy Consul, Mr. Muhammad Mustafa Kamel, and on the side of the Academy, Dr. Abdel-Fattah Abnauf, Director of the Planning and International Cooperation Department, and Mr. Mourad TLiLi, Advisor to His Excellency the Secretary General for Media Affairs. 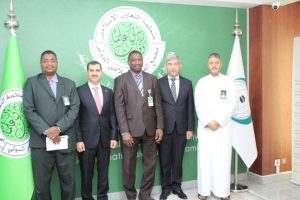