His Excellency Prof. Koutoub Moustapha Sano, Secretary General of the International Islamic Fiqh Academy (IIFA), received His Excellency Mr. Masagos Zulkifli, Minister of Social and Family Development, Second Minister of Ministry of Health, and Minister-in-charge of Muslim Affairs in the Republic of Singapore, on Tuesday 17 Jumada II 1444H corresponding to 10 December 2023G, at the headquarters of the Academy’s General Secretariat in Jeddah, Saudi Arabia.

His Excellency the Minister expressed his great thanks and gratitude to His Excellency the Secretary General for the good reception and warm welcome, stressing his keenness to make this visit to the Academy within the framework of his country’s tireless endeavor to strengthen cooperation and coordination relations with the Organization of Islamic Cooperation (OIC) and its affiliated bodies, especially the International Islamic Fiqh Academy, which is considered the first Fiqh reference for the member states of the OIC and for Muslim communities outside the Muslim world. His Excellency also noted the distinguished intellectual and scientific efforts made by His Excellency the Secretary General in particular to spread the culture of moderation, tolerance and coexistence in all regions of the world. His Excellency added that his country’s government looks with appreciation and admiration at these great efforts, and looks forward to consolidating the bonds of cooperation and coordination with the Academy in order to serve those noble human goals that call for cooperation, coexistence and acquaintance between peoples and religions, by organizing some scientific activities within Singapore that are concerned with issues and topics related to the lives of Muslim communities around the world. In this context, His Excellency extended an official invitation to His Excellency the Secretary General to visit Singapore and attend the international conference organized by the Ministry on the role of Muslim communities in their countries, and to contribute to building awareness among Muslims in Singapore through lectures and face-to-face meetings throughout the year. 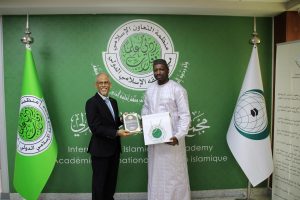 For his part, His Excellency the Secretary General welcomed His Excellency the Minister and his accompanying delegation, praising this visit, the first of its kind by a prominent member of the Singaporean government, to the Academy, which is a clear translation of the Republic’s desire to strengthen the bonds of cooperation and coordination with the Academy on various issues and topics that concern Muslim communities in Singapore and other countries and governments of Muslim communities in the Southeast Asian region in general. His Excellency took advantage of the occasion by giving the honorable guest a comprehensive overview of the Academy, its vision, mission, goals, programs and activities, expressing the permanent readiness of the Academy to cooperate with the Singaporean authorities in order to promote the approach of moderation, and tolerance among the Muslim communities residing in the Republic, and to help them preserve their Islamic identity with commitment to the requirements of citizenship, and respect for the laws and regulations in force within their country, as there is no conflict between belonging to Islam and commitment to the requirements of citizenship of any country. His Excellency also welcomed the idea of holding specialized seminars in cooperation with the official authorities in Singapore for the benefit of Muslims there and in the Southeast Asian region as a whole and expressed his thanks to His Excellency the Minister for the invitation to visit Singapore and participate in the i annual international conference organized by the Ministry. 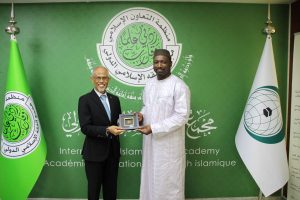 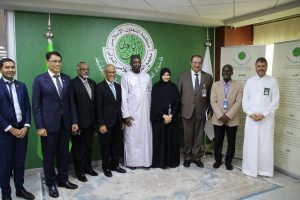