His Excellency Prof. Koutoub Moustapha Sano, Secretary General of the International Islamic Fiqh Academy (IIFA), held an important meeting with a high-level delegation from the United States of America headed by Ambassador Dr. Sara Minkara, Special Advisor on International Disability Rights at the US State Department, on Sunday 29 Jumada II 1444H corresponding to 22 January 2023G at the headquarters of the Academy’s General Secretariat in Jeddah, Saudi Arabia.

At the beginning of the meeting, Her Excellency the Advisor expressed her pleasure and honor to visit the Academy, this great Fiqh and scientific edifice and its great influence on all Muslims inside and outside the Organization of Islamic Cooperation (OIC) member states. She also thanked His Excellency the Secretary General for the good reception and warm welcome to her and the accompanying delegation, stressing that this visit represents the first stop in a series of shuttle visits that she is making to the region to mobilize support and spread awareness of the importance of the rights of people with special needs in the countries of the region, and the countries of the OIC in general, and the positive impact it has on the development, prosperity and progress of the economies and societies of the countries of the Muslim world. 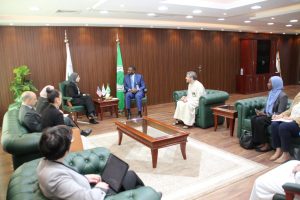 She also expressed her firm conviction and strong belief in the pivotal role that the Academy can play in mobilizing support from all parties and spreading the necessary awareness among members of society through direct contact by organizing joint seminars and conferences on the issue of the rights of people with disabilities inside and outside the Member States, from a strategic perspective based on the importance of integrating these social groups into the economic and knowledge fabric of countries and societies to make the most of their creative and inventive capabilities in the process of continuous construction and development. She concluded by expressing the US administration’s full readiness to cooperate and coordinate with the Academy in this regard. She also expressed her desire to attend seminars and conferences held by the Academy in this field. 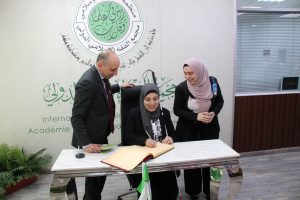 For his part, His Excellency the Secretary General welcomed the Special Envoy and her accompanying delegation, thanking her for this visit to the Academy, which indicates the appreciation of the US State Department, and the US administration through it, for the positive and pivotal role of the Academy in all efforts aimed at spreading awareness and consolidating the concept of full inclusion of people with disabilities and empowering them with all their legitimate rights, in line with the clear teachings of Islam in this field, which stipulate that all members of society be treated equally without discrimination due to disability, color or race. His Excellency also stressed the need to unite international efforts aimed at enabling all people with special needs to enjoy their full rights and the opportunity to contribute to the building, progress and prosperity of their societies and countries by investing in their unlimited intellectual and creative potential.

His Excellency also took the opportunity to renew his congratulations to Her Excellency on her appointment as a special envoy of the White House in America, wishing her success in her duties, and stressing the commitment and readiness of the entire Academy to support the efforts of her office in this field, as it believes in the sanctity of this mission. His Excellency also praised the Advisor’s commendable efforts in a number of OIC countries to spread awareness of the importance of this file and to help develop an integrated system on how to deal with it and apply it in a practical way. His Excellency concluded by expressing his aspiration for more cooperation and strong coordination between the Academy and her Excellency’s office in everything that achieves these common goals, especially with regard to organizing specialized scientific seminars to educate people and governments. 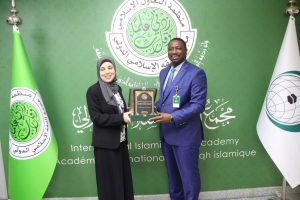 The meeting was attended by His Excellency Mr. Fares Asaad, Consul General and Special Envoy of the United States of America to the OIC, Ms. Fatimah Martin, Vice Consul Political and Economic Section, Ms. Shams Mahmoud, Political Officer at the US Embassy, and Ms. Nicole Schlichter, Foreign Affairs Officer at the Bureau of Near Eastern Affairs at the US State Department, and Mrs. Hana Nasri, Special Assistant at the Office of International Disability Rights. From the side of the Academy, Dr. Abdel-Qaher Qamar, Director of the Studies and Research Department, Dr. AlHagi Manta Drammeh, Head of the International Cooperation and External Relations Division, and Mr. Mourad TLiLi, Advisor to His Excellency the Secretary General for Media and Public Relations Affairs. 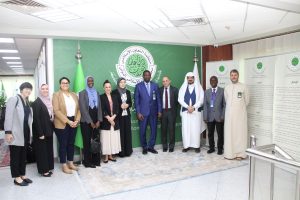