This year’s conference was entitled “Waqf and its Role in Serving Muslim Communities in Latin America and the Caribbean”, organized by the Islamic Dawah Centre for Latin America and the Caribbean states in Brazil under the auspices of the Ministry of Religious Affairs, Dawah and Guidance in the Kingdom of Saudi Arabia. More than 100 scholars, intellectuals, academics, Islamic personalities, and students from more than 30 countries around the world participated in the conference.

His Excellency began his speech by expressing his sincere thanks to the Dawah Center in Brazil for its invitation to participate in this important timely conference on one of the most important topics of the day that should be treated as a ritual of eternal Islam, and a means of combating poverty in societies, especially Muslim communities outside the Muslim world. He also pointed out that Waqf is an important source of income throughout Islamic history, noting that important role it has played in meeting the needs of the needy bereaved and orphaned, as well as its role in supporting the economy of states and societies, as well as other aspects of life. Therefore, there is a great need today to pay more attention to waqf in terms of research, development, review, its different dimensions and realization in order to play the role it is required to play, as the world at large is going through the most critical health and economic crisis in decades, which has cast a shadow over all aspects of human life.

His Excellency added that the Waqf industry in general has become today, thanks to God, a source of pride for the Muslim ummah as a result of the great position it occupies in Islamic social finance, and Waqfs have become the subject of study in universities and scientific centers in recognition of its prominent role in combating unemployment and reducing social differences and disparity. It also plays a pivotal role in diversifying the sources of philanthropy and doing good. His Excellency pointed out that due to the trends and developments witnessed in the economic and finance arena, there is a need to keep up with the scientific approaches in guiding the developments in order to preserve the development of the industry and its progress, praising in this regard mature scientific resolutions and practical and effective recommendations issued by the Academy during many of its sessions on Waqf grounded on its jurisprudence, circumstances, and new developments. In the meantime, His Excellency added that the Academy in its fifteenth Session held in Muscat Oman, and nineteenth Session in Sharjah in the United Arab Emirates permitted the use of all contemporary types and forms of Waqf, starting with properties, shares and Sukuk through Waqf of money, and whether the Waqf is permanent or temporary 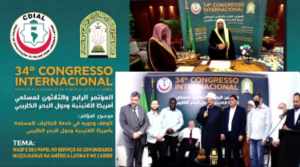 Accordingly, His Excellency called on Muslim communities outside the Muslim world stating: “I call on you to benefit from these original Academy’s resolutions, and to welcome in-kind endowments (=real estate), cash endowments (= moveable goods and money), life endowments and temporary endowments. The Shariah texts on Waqf are flexible, general, and absolute, for generations. The purposes of the Law in donations and gifts are to diversify the sources of doing good and philanthropy as the Qur’an states: (Never will you attain the good [reward]1 until you spend [in the way of Allah] from that which you love) Ali’Imran:92. The word “ma” is a form of common that cannot be allocated in a special kind of righteousness but includes and generalizes all forms and types of good, both permanently or temporarily, in kind or in cash. His words, peace be upon him: “if a person dies, their deed stops except three: An ongoing charity (Sadaqat jariyah), knowledge to benefit from, or a good child to pray for the deceased”. The term “charity” is intended as an absolute one, which is not restricted by a type but is comprehensive for each charity whether in- kind or monetary, permanent, or temporary.

His Excellency the Secretary General then concluded his intervention by thanking and praising the Government of the Kingdom of Saudi Arabia represented in the Ministry of Islamic Affairs, Dawah and Guidance for its sponsorship of this conference, and its support for it, and its interest in Muslim communities in Latin America and around the world, and singled out thanks and praise to His Excellency Minister Sheikh Abdul Latif bin Abdul Aziz Al Sheikh for his participation, attendance and sponsorship of the closing ceremony of the conference. He then asked Allah the Almighty to preserve the country of the Two Holy Mosques, KSA, and the United Arab Emirates from the criminal attacks they are subjected to these days from terrorist groups seeking to destabilize their security and stability, and to terrorize their people.

The conference issued several recommendations, including the importance of introducing the broad concept of Waqf, highlighting its prominent role in building Muslim civilization, the need for Muslim communities to it, spreading the culture of Waqf through available means with a focus on modern means of communication, and teaching the shariah legal provisions of Waqf in Islamic universities and institutes. The conference also recommended workshops and training sessions for Waqf administrators and trustees on performance development, improved management, and the development of by-laws to meet the criteria for successful performance, as well as partnerships between Waqf departments and Zakat funds to advance Waqf. The conference also condemned the repeated attacks on Makkah, the Qibla of Muslims, the territories of Saudi Arabia, the United Arab Emirates and civilians by the Houthi terrorist militias and the demand of the international community to assume its responsibilities towards it.