His Excellency Mr. Kanaan Adnan Al-Azzawi, Consul General of the Republic of Iraq to the Kingdom of Saudi Arabia and its Permanent Representative to the Organization of Islamic Cooperation (OIC), accompanied by a delegation from the Consulate General, visited on Monday 28 Jumada II 1443H corresponding to 31 January 2022D the headquarters of the General Secretariat of the International Islamic Fiqh Academy (IIFA) in Jeddah, Kingdom of Saudi Arabia.

His Excellency Prof. Koutoub Moustapha Sano, the Secretary General of the Academy, welcomed his Excellency and the accompanying delegation, thanking him for the visit, and expressed his heartfelt thanks and appreciation to the Republic of Iraq for its continuous support and care for the Academy and the Organization from its establishment to this day. Then His Excellency gave his guest a brief overview of the Academy’s activities and various programs and the developments it has witnessed in the recent period, noting in this regard the prestigious position and great respect that the Academy enjoys at the level of the OIC member states and the world at large with regard to spreading moderation and promoting a culture of peace, tolerance and coexistence among peoples and religions. His Excellency also assured his guest of the Academy’s readiness to provide juristic and intellectual support to the Republic of Iraq in order to enhance its appreciated efforts in the field of rejecting fanaticism and extremism that fuel terrorism and spread discrimination and chaos, and call for wanton aggression against people, their dignity, and public and private property. 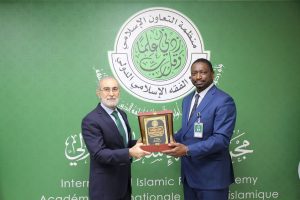 Then His Excellency concluded by expressing his aspiration to strengthen cooperation and coordination with scientific and juristic institutions and centers in Iraq through partnership in holding conferences, seminars, and workshops with Iraqi scholars on ways to dismantle extremist ideology and correct misconceptions about Islam.

For his part, the Consul General expressed his pleasure and honor to visit the Academy, and his thanks and gratitude to His Excellency the Secretary General for the warm reception and great welcome, stressing his country’s keenness to establish strong and sustainable relations with the Academy and to benefit from it in addressing many religious and intellectual issues that occupy Iraqi society. He also expressed his great appreciation for the qualitative changes and remarkable developments that the Academy’s General Secretariat has been witnessing, both at the administrative level and at the scientific and intellectual level, since His Excellency assumed his duties as Secretary General of the Academy, praising His Excellency’s great keenness to unify the Ummah’s voice and spread the correct concepts of the true religion. His Excellency also expressed his welcome to the Academy’s desire to enhance relations of cooperation and communication between the General Secretariat of the Academy and the well-established and reliable Iraqi scholars in support of the efforts of the Government of Iraq in combating intolerance, extremism, and terrorism.

His Excellency concluded by expressing his good wishes to the Secretary General and the Academy for more success in achieving the activities and programs of the Academy’s strategic plan, stressing the readiness of the Permanent Delegation of Iraq to provide all facilities and services necessary for the success of the Academy’s various programs and projects.

On the Iraqi side, the meeting was attended by Consul Nihad Hamad Al-Dulaimi, Diplomatic Adviser Mayia Hadi Mahdi, and Deputy Consul Mohammad Mustafa Kamel. On the part of the Academy, Mr. Mohamed Al-Mondher El-Chouk, Director of Cabinet and Protocol Affairs Department, and Mr. Mourad TLiLi, Advisor to the Secretary General for Media Affairs. 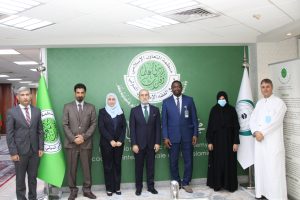