His Excellency Prof. Koutoub Moustapha Sano, Secretary General of the International Islamic Fiqh Academy (IIFA), received on 14 Shawwal 1443H, corresponding to 15 May 2022G, Her Excellency Ms. Reem Al-Salem, the United Nations Special Rapporteur on Violence against Women, at the headquarters of the General Secretariat of the Academy in Jeddah, Kingdom of Saudi Arabia.

His Excellency welcomed the honorable guest and thanked her for the visit, congratulating her on her assumption of the position of the United Nations Special Rapporteur on Violence against Women, and wishing her every success in her endeavors. His Excellency also expressed his great appreciation and thanks to Her Excellency for her commendable efforts in order to hilight the various forms of violence and abuse of women by depriving them of their basic civil rights such as education, work, health and others in many countries of the world, especially some countries of the Muslim world.

His Excellency added that the Shariah has preserved all the rights of women for centuries and urged their good education and upbringing and their active participation in the development of the economy and the effective contribution to the creation of national wealth. The Shariah considered her the man’s sister and partner in the tasks of building peoples and the renaissance of nations and also assigned her duties not different from the duties assigned to her brother the man, emphasizing the importance of the contribution of both sexes to achieving renaissance, progress and development. 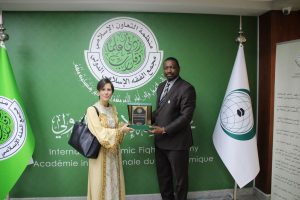 His Excellency also touched on the upcoming visit of the delegation of the Academy under the umbrella of the Organization of Islamic Cooperation (OIC) to the Islamic Republic of Afghanistan, in order to discuss with the Taliban scholars and current Afghan leaders a number of issues and topics of concern to the international community, and the need to open a door for dialogue and discussion with them. His Excellency affirmed that he looks forward with optimism to the visit, which will deal with a number of issues of concern to Muslims in Afghanistan, on top of which is the issue of women’s right to education, and their full participation in building Afghan society, based on the teachings of our religion, which necessitates education and learning for both sexes.

For her part, the Special Rapporteur expressed her great pleasure at visiting the Academy, and her great appreciation for the appreciable efforts it made in correcting practices whereby many of the basic civil rights granted by Shariah to women in all areas are withheld, and she also expressed her gratitude for the central role of the Academy in promoting awareness of the importance of empowering women to participate in the efforts of construction, progress and development in the Muslim world, praising in the meantime the successful decisions of the Academy related to issues such as women’s education, female genital mutilation, underage marriage, women’s work, and others.

Her Excellency concluded by expressing her aspiration for the success of the delegation of the Academy, led by His Excellency the Secretary General, in its efforts to convince the new authorities in Afghanistan to grant Afghan women their right to education, work and active participation in public life. She also affirmed her complete readiness to support the efforts of the Academy in this regard and to harness all her capabilities and expertise in the service of the Academy’s noble mission.

At the end of the meeting, His Excellency thanked his honorable guest for her proposals and cooperation initiatives, noting that he looks forward to strengthening cooperation between her Excellency’s office and the Department of Women and Family Affairs at the Academy in many issues and topics of concern to both parties in order to achieve results that benefit Muslim women wherever they are. 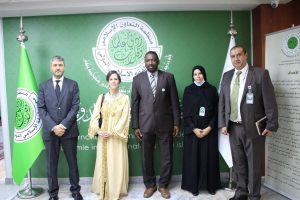