His Excellency Prof. Koutoub Moustapha Sano, Secretary General of the International Islamic Fiqh Academy (IIFA), participated in the Hajj Great Symposium in its 46th edition in Makkah Al-Mukarramah, on 4-5 of Dhu Al-Hijjah 1443H corresponding to 3-4 July 2022G, entitled “Pilgrimage after the Pandemic… Rites and Care”. The symposium included sessions, discussions, research, and lectures, in the presence and with the participation of a number Ministers, scholars, jurists and thinkers from inside and outside the Kingdom of Saudi Arabia. 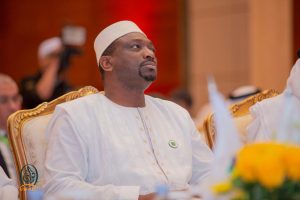 At the beginning of his speech, His Excellency the Secretary General the Academy expressed his thanks, appreciation and gratitude to the leadership, government, and people of the Kingdom of Saudi Arabia for the great and accessible services they provide to Muslims around the world to enable them to perform Hajj and Umrah in the best conditions. His Excellency also thanked the Ministry of Hajj for organizing this specialized symposium, for inviting the Academy to participate, and for well choosing its topic.

During his intervention, His Excellency stressed that the jurisprudential system is based on a set of principles, rules, and purposes that the mujtahid uses to clarify the provisions of Shariah in calamities and problems of contemporary life, and this system includes the sum of Shariah evidence from the Qur’an, Sunnah, consensus, analogy, interests, juristic preference (istihsan), and others. It also includes what has become known as the major Fiqh rules such as the rule of things with their purposes, the rule of necessities permits prohibitions, the rule of no harm to either party, and others. This system also includes the purposes of the five universal principles of preserving life, religion, family, property, and intellect, in addition to that, is the system that considers the consequences of actions. As for calamities, His Excellency clarified that they are “issues and matters that do not have direct texts, and the predecessors did not deal with them because they occurred after their time and era, which opens the door for renewed and broad ijtihad. Accordingly, the jurist must rely on this system to guide the calamities of the age, correcting them and directing them, based on the principles of inference and deduction, and based on Fiqh rules, and on the supreme objectives of Shariah, while paying attention to the consequences of actions.”

His Excellency added: “Given the complication and complexity of the nature of calamities and the predominance of generalities, scholars should address ijtihad through Fiqh academies, legal bodies and supreme councils, considering that ijtihad in calamities and public issues must be collective ijtihad, not individual ijtihad, and it must be undertaken by Fiqh councils and official institutions in the member states to avoid individual interpretations that could err and cause confusion, contradiction and disharmony”. His Excellency indicated that “the ability of the Fiqh system to direct calamities and developments in every age and time requires its ability to consider three things, namely, keeping pace with calamities by fully absorbing them, taking into account development by making use of all available technologies and modern means, and taking into account realism through the selection of Shariah rulings that are appropriate to time and place based on the rule that does not deny the change of fatwa with the change of times, places, conditions, and situations”.

It is worth mentioning that the Great Hajj Symposium, is one of the most prominent scientific events organized by the Ministry of Hajj and Umrah annually since 1390H corresponding to 1970G, aims to discuss calamities and issues related to Hajj and the service of pilgrims. 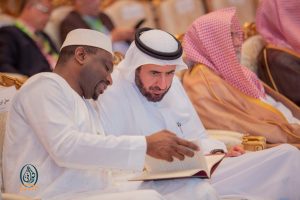