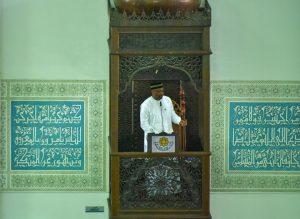 His Excellency also spoke about special times for supplications that the Prophet, may God’s prayers and peace be upon him and his family, recommended, such as the time of rain, between the call to prayer and the iqaamah, the last third of the night, Friday, Laylat al-Qadr, the day of Arafa, and when breaking the fast. He concluded his sermon by clarifying the conditions that must be met for those supplications to be answered, and these are the conditions that were referred to in the authentic hadith: “the servant will still be answered as long as he does not supplicate for sin, or severing the ties of kinship, and as long as he does not rush. It was said oh Prophet of God, what’s rush? He said: To say: I have prayed, I have prayed and there is no response, so he will regret it, and abandons the supplication”.

This sermon was well received by the audience.

It is worth mentioning that His Excellency had previously been given the honor of teaching in this prestigious university in both Arabic and English during sixteen (16) years, and he also received the royal decoration known as “Dato” from His Majesty the late Sultan Haji Ahmed Shah Al-Musta’in Billah, the son of the late Sultan Abu Bakr Re’ayat Al-Din Al-Moazam Shah, the former King of Malaysia, in recognition of his contribution to the advancement of education in Malaysia, both in terms of teaching and development.

This large mosque, located in the center of the university city in the village of Gombak, can accommodate ten thousand worshipers. 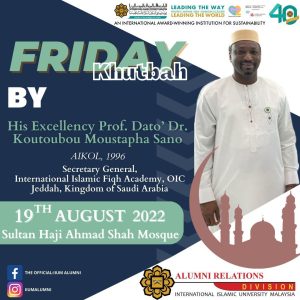