His Excellency Prof. Koutoub Moustapha Sano, Secretary General of the International Islamic Fiqh Academy (IIFA), received on Wednesday 18 Safar 1444H corresponding to 14 September 2022G, at the headquarters of the General Secretariat of the Academy in Jeddah, His Excellency Ambassador Ibrahim Adam Musa, the new permanent representative of the Federal Republic of Somalia to the Organization of Islamic Cooperation (OIC) and his accompanying delegation.

At the beginning of the meeting, His Excellency the Secretary General welcomed the honorable guest and congratulated him on his appointment as a permanent representative of Somalia to the OIC, wishing him success in his duties, and praising his keenness to consolidate and strengthen the bonds of cooperation, communication and coordination between the Academy and the institutions and scientific centers in Somalia. His Excellency also referred to the special status enjoyed by the Federal Republic of Somalia inside the OIC and the Academy in particular, stressing the full readiness of the Academy to provide intellectual and Shariah support to the Somali authorities in their efforts to spread the culture of moderation, tolerance and coexistence, and to combat extremist ideology, fanaticism and terrorism. His Excellency expressed the Academy’s firm aspiration to cooperate with the great scholars of Somalia in order to promote moderation, reject fanaticism and extremism, and dismantle hate speech, violence and extremism, in order to protect young people from falling into the fallacies of the infatuated who shed blood, abuse honor, and attack public and private property in the false name of religion falsely and slanderously. 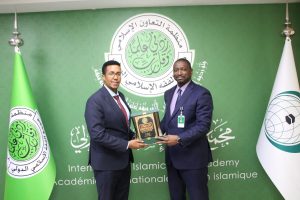 For his part, the ambassador expressed his happiness and pride in this first visit to the Academy since he took office, where he had the honor of meeting His Excellency the Secretary General and discussing with him the religious issue in Somalia and the best ways to support peace, reform and development efforts in Somalia. His Excellency also expressed his firm belief that deep intellectual change is the cornerstone of any radical change and reform in Somali society, and therefore cooperation with the Academy on this basis comes within the framework of these blessed efforts to benefit from the scientific and intellectual capabilities of the Academy to serve the agenda of peace and societal reform in the Federal Republic of Somalia by spreading the culture of moderation, pacifism and tolerance and rejecting extremist and backward ideology and false religious concepts by organizing specialized scientific seminars and conferences inside and outside Somalia in cooperation and partnership with Somali authorities and scholars.

The meeting was attended by His Excellency Mr. Abdul Rahim Othman Elmi, Deputy Permanent Representative of Somalia to the OIC, Mrs. Sarah Badewi, Director of the Department of Family, Women, Childhood and the Elderly Affairs at the Academy, Dr. Alhaji Manta Drammeh, Head of the Division of International Cooperation and External Relations at the Academy, and Mr. Mourad TLiLi, Adviser to His Excellency the Secretary General of the Academy for Media affairs and Public Relations. 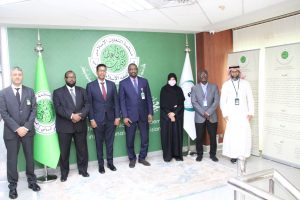