His Excellency Sheikh Dr. Saleh bin Abdullah bin Humaid, Advisor at the Royal Court, member of the Council of Senior Scholars, imam and khatib of the Grand Mosque, and president of the International Islamic Fiqh Academy (IIFA), on Sunday 29 Safar 1444H corresponding to 25 September 2022G, visited the headquarters of the General Secretariat of the Academy in Jeddah, where he was received by Prof. Koutoub Moustapha Sano, Secretary General of the Academy.

His Excellency welcomed the great guest, thanking him for this honorable visit, and expressing his personal gratitude, as well as the gratitude of all the employees of the General Secretariat, to His Excellency for the constant care, great support, and continuous guidance. He also expressed to him the great thanks and appreciation of the Academy for the great facilities and distinguished services provided to it by the headquarters state under the wise leadership of the Custodian of the Two Holy Mosques, King Salman bin Abdelaziz Al Saud, and his trusted Crown Prince, His Royal Highness Prince Mohammed bin Salman bin Abdelaziz Al Saud, may God preserve them, to enable it to carry out its mission with ease and comfort. Then His Excellency briefed His Excellency the President on the latest preparations for holding the twenty-fifth Session of the Council of the Academy, to be held this year in Jeddah under the patronage of His Royal Highness Prince Khalid bin Faisal bin Abdelaziz Al Saud, Adviser to the Custodian of the Two Holy Mosques, Governor of the Makkah Region. 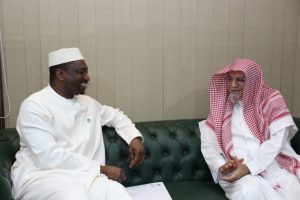 For his part, His Excellency the President of the Academy expressed his great pleasure and great appreciation for the esteemed efforts exerted by the General Secretariat of the Academy at all levels, which enhances the position of this leading scientific institution within the member states of the Organization of Islamic Cooperation (OIC) and Muslim communities outside the Muslim world, congratulating His Excellency the Secretary General and his assistants on the Royal approval to hold the next Session in Jeddah, expressing his readiness to provide all the support and guidance needed by the General Secretariat to ensure the success of the Session. 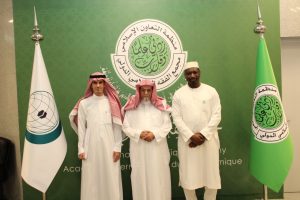