Within the framework of strengthening the relations of cooperation, partnership and coordination between the International Islamic Fiqh Academy (IIFA) and the institutions and scientific centers that are active in the field of Shariah studies and scientific research inside and outside the Muslim world, and based on the goals of the Academy, which provides for fatwas of Muslim groups and communities outside the states of the Muslim world in a way that preserves the values ​​and culture of Islam, and its traditions, in order to preserve their Islamic identity while adhering to the requirements of citizenship and residency in those non-Muslim societies, His Excellency Prof. Koutoub Moustapha Sano, Secretary General of the Academy, signed with His Excellency Prof. Muhammad Mansour Alem, President of the Institute of Objective Studies in India, on Thursday 03 Rabi’ Al-Awwal 1444H corresponding to 29 September 2022G, a memorandum of strategic cooperation between the two parties.

This memorandum aims to build a strategic partnership in the field of supporting the scientific and research capabilities and abilities of the two institutions, and to enhance cooperation and coordination in supporting and assisting Muslim communities outside the member states of the Organization of Islamic Cooperation (OIC), and to provide fatwas and appropriate solutions to them, in a manner that achieves the interests of these communities and contributes to their integration in their countries. It also aims to promote moderation, spread a culture of moderation, tolerance and coexistence, and reject fanaticism, extremism, exclusion, violence, and hatred, through joint organization of conferences and seminars, holding workshops and training, exchanging publications and periodicals, and representing the two sides in the work of conferences and symposia that are held with the knowledge of each of them in the field of interest common between them. 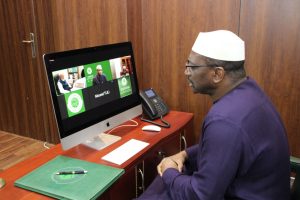 Commenting on this memorandum, His Excellency the Secretary General of the Academy expressed his happiness at signing this agreement with a reputable scientific institution active in one of the countries in which the largest number of Muslim communities live, namely the State of India, which has a Muslim population of nearly two hundred million, expressing his hope that it will be the beginning of a new phase of solid and fruitful relations of cooperation between the Academy and the Institute to coordinate efforts and provide effective solutions to the problems of contemporary life, and in search of ways to address hatred, exclusion and abuse against Muslims in India. His Excellency affirmed the Academy’s readiness to provide support and encouragement to the Institute and to harness all the scientific and intellectual capabilities of the Academy to serve the Muslims of India and Muslim communities in general. 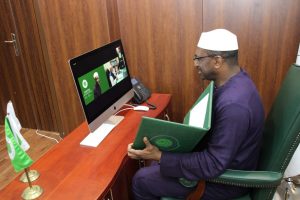