In an effort to strengthen relations of cooperation and partnership with academic and scientific institutions in the countries of Muslim communities, His Excellency Prof. Koutoub Moustapha Sano, Secretary General of the International Islamic Fiqh Academy (IIFA), and His Excellency Dr. Abubaker Jaber Abubaker, Head of College and Vice-Chancellor of Al-Maktoum College of Higher Education at the University of Dundee in Britain, signed a cooperation agreement between the two parties on Saturday 18 Rabi` al-Thani 1444H, corresponding to 12 November 2022G, in the British capital, London, on the sidelines of the Al Baraka Forum for Islamic Economics.

After signing the memorandum, His Excellency expressed his thanks and appreciation to His Excellency the Principal of the College for coming to London to sign this memorandum, the first of its kind between the Academy and a promising higher educational institution, praising the intellectual and academic role played by the College in spreading the tolerant teachings of Islam, and correcting the image of Islam and Muslims in the United Kingdom in particular, and in Europe in general. His Excellency also expressed the Academy’s full readiness to provide all forms of intellectual and Shariah support to this college, which he described as ancient and distinguished, by providing it with the Academy’s publications and periodicals, and enabling its faculty to participate in seminars and conferences organized by the Academy from time to time, especially those scientific forums that aim to spreading the values ​​of moderation and fairness, and combating fanaticism and extremist ideology. 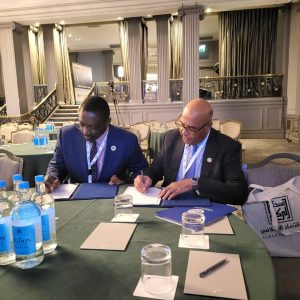 For his part, His Excellency the Principal of the College expressed his pleasure and pride in signing this agreement with the Academy, which is today the most important Shariah and Fiqh reference for the Muslim Ummah, as it is the largest contemporary institution for collective ijtihad and its members represent all member states of the Organization of Islamic Cooperation (OIC). His Excellency added that the College is eagerly looking forward to a rich stage of academic and intellectual cooperation with the Academy on a number of issues and topics of concern to both parties, such as supporting the values ​​of peaceful coexistence and tolerance, spreading fraternity and harmony among people, and combating extremist ideology and confronting it in a convincing intellectual and peaceful manner. Then His Excellency the Principal invited His Excellency the Secretary General to visit the college in order to see the new Islamic studies programs that will be offered at the beginning of next year.

The signing ceremony was witnessed from the side of the college by Dr. Alija Avdukic , and Dr. Muhammad Al-Saghir. From the side of the Academy by Mrs. Sarah Amjad Bedawi, Director of the Family and Women’s Department, and Dr. AlHagi Manta Drammeh, Head of the International Cooperation and External Relations Division. 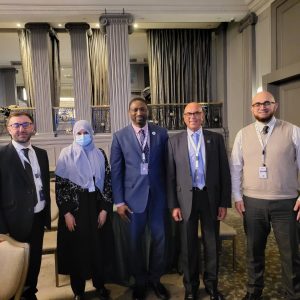