Within the framework of the International Islamic Fiqh Academy’s (IIFA) endeavor to build strategic partnership relations with distinguished Islamic institutions and centers that are concerned with enabling Muslim communities to adhere to the approach of moderation and spreading a culture of moderation, tolerance, coexistence and harmony among followers of religions, and a desire to enable these institutions and centers to make the most of the resolutions and recommendations of the Academy that include effective solutions to many of the problems of contemporary life and emerging issues, His Excellency Prof. Koutoub Moustapha Sano, Secretary General of the Academy, and His Excellency Mr. Abdul Samad Al Yazidi, Secretary General of the Supreme Council of Muslims in Germany, signed a memorandum of cooperation between the two institutions, on Monday 20 Rabi` al-Thani 1444H corresponding to 14 November 2022G in Frankfurt, the Federal Republic of Germany.

Following the signing of the memorandum, His Excellency expressed his great pleasure at the completion of this agreement and stated, “We in the Academy seek, through this agreement, to enhance cooperation and coordination with the Supreme Council of Muslims in Germany, in appreciation and recognition of the distinguished role that this council plays in guiding, managing, and streamlining Muslims in Germany, and reaffirming our keenness to provide intellectual and Shariah support to Muslim communities outside the member states of the Organization of Islamic Cooperation (OIC) to enable them to adhere to the requirements of citizenship and residency while preserving their Muslim identity, and the values ​​and principles of Islam. We also hope that, through this memorandum, we will be able to cooperate with the Council in monitoring emergencies, problems and emerging Fiqh issues with the aim of providing fatwas and appropriate solutions to them, in a way that achieves the interests of those communities and contributes to their integration in their countries. In addition, we look forward to cooperating with the Council to organize training courses to train and supervise muftis, imams and preachers within Muslim communities in Europe, in a way that contributes to formation of a new generation of religious leaders capable of facing the challenges of the age in the tolerant spirit of Islam, and working to promote the values ​​of dialogue and coexistence, and presenting the true image of Islam in order to correct misconceptions about Islam and Muslims.” 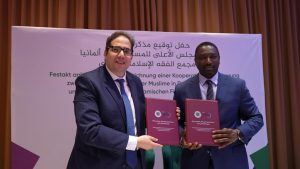 For his part, His Excellency the Secretary General of the Council stated, “This partnership is considered a quantum leap in the policy of the Supreme Council of Muslims in Germany to consolidate its relations with international Muslim organizations, and it will undoubtedly shorten long distances for the Supreme Council and its scientific body in the field of Fiqh, which in turn will contribute effectively to the establishment of a significant religious authority for Muslims in Germany. We also look forward, through this agreement, to achieving an intellectual and cultural change within the Muslim community in Germany, by encouraging Muslim citizens or residents to abide by the requirements of citizenship and residency, and to work to be real partners within the state, and to contribute effectively and positively in building and advancing their society and human civilization in general, and to be an example of tolerance and peaceful coexistence between religions and races.”

The signing ceremony of the memorandum of understanding included welcoming speeches by Mr. Ayman Mazyak, President of the Supreme Council of Muslims in Germany, Mr. Daniel Holitingen, Commissioner of the Council of Europe in charge of combating anti-Semitism and Islamophobia, and Mr. Nadim Suleimanovich, Deputy Director of the Department of Religions and Foreign Policy at the Ministry of Foreign Affairs Germany, Mr. Ayoub Kailon, official spokesman for the Coordinating Council of Muslims in Germany, and Pastor Tharwat Qadis, President of the Abrahamic Forum in the Middle East and North Africa, and a member of the Evangelical Church in Germany. 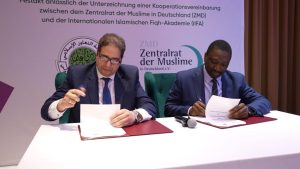 It should also be noted that the signing ceremony also included a lecture on “The Concept of Citizenship and the Question of Identity” delivered by His Excellency the Secretary General of the Academy to the audience, in which he addressed the most important points and questions raised by Muslims in Western societies in particular, pointing out that the rights and duties of citizenship do not conflict with the religious identity of the individual, on the contrary, they are in permanent integration and solidarity, and that Muslims in Germany and Europe in general must contribute and participate actively in the process of civilizational construction, development and advance in their societies to be an element of positive enrichment and diversity that benefits their societies and countries in which they choose to live. The ceremony concluded with a speech by Sheikh Al-Baqali Al-Khammar, member of the European Council of Moroccan Scholars, and president of the Imams Association in the Netherlands.

The signing ceremony was attended by representatives of the Board of Directors of the Supreme Council, and the Secretary General of the International Islamic Fiqh Academy, Prof. Koutoub Moustapha Sano, accompanied by Dr. Alhagi Manta Drammeh, Head of the International Cooperation and External Relations Division, and Ms. Sarah Amjad Bedawi, Director of the Family and Women’s Affairs Department, along with A group of scholars, imams, religious and political figures, officials, and civil society activists. 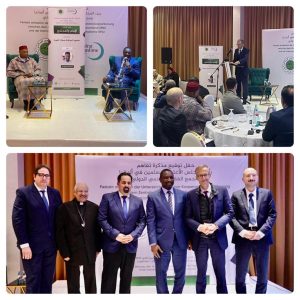