His Excellency Sheikh Dr. Saleh bin Abdullah bin Hamid, member of the Council of Senior Scholars, imam and Khatib of the Great Mosque of Mecca, and President of the International Islamic Fiqh Academy (IIFA), and His Excellency Prof. Koutoub Moustapha Sano, Secretary General of the Academy, participated in the 35th International Conference of Muslims of Latin America and the Caribbean under the slogan “Muslims of Latin America Confronting the Phenomenon of Hatred“, which is held from 24-26 Rabi` al-Thani 1444H, corresponding to 18-20 November 2022G, in the Brazilian capital, São Paulo.

The opening ceremony of the conference began with the Kingdom of Saudi Arabia’s speech of His Excellency the Minister Sheikh Dr. Abdul Latif bin Abdulaziz Al Sheikh, delivered on his behalf by the Undersecretary of the Ministry for Islamic Affairs, His Eminence Sheikh Awad bin Sabti Al-Anzi, then the speech of His Excellency the Representative of the President of the Republic of Brazil, Federal Representative Luis Marinho, in which he indicated that the Muslim community is one of the most integrated communities in society, emphasizing the importance and necessity of such conferences, and the importance of cooperation to reject hatred and establish tolerance, thanking KSA for its sponsorship of this conference, then the speech of the President of the Islamic Da’wah Center for Latin America and the Caribbean, Dr. Ahmed Ali Al-Saifi, about the dangers of the spread of the phenomenon of hatred and its negative effects on Latin American Muslims and the world in general.

Then His Excellency Sheikh Dr. Saleh bin Abdullah bin Humaid, President of the Academy, delivered his speech in which he explained that the target groups of hate speech are often the weak or minorities, and it is important to differentiate between freedom of opinion, which is guaranteed to all, and freedom of expression, which must be subject to many controls, the most important of which is respect for the rights of others and the protection of public security, and His Excellency stressed that hate speech is in complete contradiction with the values ​​of tolerance and coexistence among all human beings.

The first session of the conference was chaired by His Excellency Prof. Koutoub Moustapha Sano, Secretary General of the Academy, and it discussed the first topic of the conference on “The Concept of Hatred in the West, Its Origin and Development“. In his introductory speech to the session, His Excellency clarified that the phenomenon of hatred in all its exclusionary and racist forms, which classifies people according to their religion, gender or color, is considered one of the dangerous phenomena that has grown and spread in the world and has not spread or escalated for one reason or one motive, but rather for a group of reasons and motives in which the right is mixed with falsehood, a mixture of accumulations that led to the spread of this phenomenon. His Excellency stressed that Islam has been keen from the beginning to reject hatred and spread a culture of tolerance and fraternity, whether between Muslims with each other or with other nations. The culture of love and affection was reflected in the behavior of Muslims and in the turnout of non-Muslims to embrace this religion, which urges mercy even with the enemies. Therefore, as a result of the spread of this danger from the phenomenon of hatred and its negative effects on Muslims all over the world, and the need to confront it by confronting its origin, developing advanced means to correct misconceptions, and striving with all available intellectual and practical means to uncover delusions and misconceptions and confront them through guidance, awareness, clarifying the true picture of Islam, and demonstrating the moderation of this religion.

And participated in the session, which was chaired by His Excellency the approved religious representative of Dar Al-Fatwa in Brazil and Latin America, Sheikh Ali Deeb Al-Khatib, who spoke about the concept of hatred from the linguistic, Shariah and psychological point of view, while the imam of the Bari Mosque in Brazil, Sheikh Rodrigo Rodrigo spoke about the difference between hatred, loathing and racism, and the Advisor and Assistant Chief Justice of Palestine, Dr. Khaled Baroud, discussed the origins of hatred in the West and its development after the events of September 11. Also participating in the session were the Chairman of the Board of Trustees of the Development Path Foundation in Egypt, Dr. Salah El-Din El-Jaafrawi, and the Director of the Arab-Latin Cultural Center in Ecuador, Dr. Ahmed Abdo, who talked about the phenomenon of Islamophobia and its relationship to hatred: Latin America as a model. The session concluded by addressing the concept of hatred in the West: Ecuador as a model, in which Dr. Muhammad Anis spoke.

The conference is being held this year under the auspices of the Ministry of Islamic Affairs, Da’wah and Guidance in the Kingdom of Saudi Arabia, with the participation of ministers, ambassadors and official delegations from 30 countries, and researchers and specialists from 100 countries around the world. In its current session, the conference discusses the topic: “Latin American Muslims Confronting the Phenomenon of Hatred“, and seeks to achieve the goals for which it was held, represented in identifying the concept of hatred from the linguistic, Shariah and psychological aspects, explaining the causes of hatred, identifying the origins and development of hatred in Western societies, highlighting the seriousness of the phenomenon of hatred and its impact on the unity of society and social peace, identifying the role of Islamic authorities, bodies, centers and institutions in confronting the phenomenon of hatred, and finally contributing to the development of some strategies and programs to confront the phenomenon of hatred.

It should be noted that the conference, which is organized by the Islamic Da’wah Center in Brazil in cooperation with the Ministry in KSA, will continue for three days, in which the participating delegations will discuss ways to address the phenomenon of hatred and prevent its devastating effects on societies and countries, and develop scientific and practical strategies and mechanisms to contain it and eliminate its causes, by correcting misconceptions and dissemination of the true values ​​and principles of the Islamic religion in moderation, and which calls for fraternity, tolerance and coexistence among all peoples of the world without distinction or discrimination. 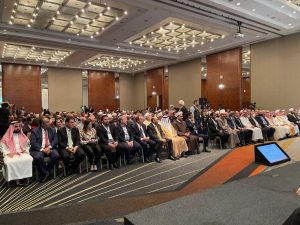