His Excellency Ambassador Dr. Shafiq Samim, Permanent Representative of the Islamic Republic of Afghanistan to the Organization of Islamic Cooperation (OIC), visited His Excellency Prof. Koutoub Moustapha Sano, Secretary General of the International Islamic Fiqh Academy (IIFA) on Monday 04 Shaaban 1443H corresponding to 07 March 2022G, at the Headquarters of the General Secretariat of the Academy in Jeddah.

His Excellency expressed his great thanks to his Excellency the Secretary General for his warm welcome and good reception, as well as his great appreciation for the qualitative changes and developments witnessed by the General Secretariat of the Academy at all levels since His Excellency took over the reins of the Secretariat, praising his Excellency’s keenness to unify the Ummah, spread the correct concepts of religion, and promote the values of moderation and peaceful coexistence.

His Excellency then touched on the upcoming visit of the delegation of the Academy under the umbrella of OIC to the Islamic Republic of Afghanistan, in order to discuss with Taliban scholars and Afghan leaders a number of issues and topics of interest to the leaders of the Member States of the OIC, and the need to open the door for dialogue and discussion with them in order to reach satisfactory results for all parties, and to achieve the desired social cohesion and peace for the Afghan people, who have suffered for long periods of the scourge of war and civil unrest. His Excellency concluded by expressing his aspiration for the success of this visit under the leadership of His Excellency the Secretary General of the Academy and confirmed his full readiness to provide all the necessary facilities for the success of the visit. 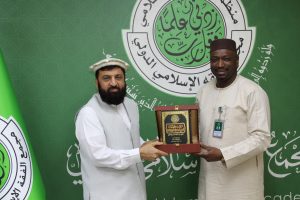 For his part, His Excellency the Secretary general of the Academy welcomed his guest and thanked him for this visit, which demonstrates the appreciation that his Excellency and the Afghan Representation have for the Academy, and emphasizes the sincere desire to strengthen the relations of cooperation and communication between the General Secretariat of the Academy and scientific and religious institutions in Afghanistan, while praising the high scientific level enjoyed by Afghan scholars and the pivotal role they play in consolidating and establishing social harmony and peace, and compliance with the teachings of the religion, as well as to strengthen cooperation and solidarity among the Afghan people without discrimination or exclusion of any group of Afghan society.

His Excellency concluded by emphasizing that the Academy looks forward optimistically to the visit of a delegation of scholars of the Academy to Afghanistan in order to discuss with Afghan leaders and scholars on a number of issues of concern to Muslims in Afghanistan, notably the importance of joining forces to promote tolerance and coexistence, acceptance of the other, empowerment of both sexes in education, and the participation of Afghan women in building Afghan society, based on the teachings of our religion, which calls for these principles and values that bring to the nations renaissance, progress, development, and prosperity.

In the meantime, he noted the prominent role that the scholars of Afghanistan can play in educating, directing, and guiding the Afghan people in order to correct concepts that are contrary to the clear commandments and teachings of Shariah. The Secretary General also confirmed to his Excellency the full readiness of the Academy to make available all its scientific capabilities to support Afghanistan and the Afghan people in spreading moderation, establishing a culture of tolerance and coexistence, and rejecting all forms of violence, extremism, and radicalization.

The meeting was attended by Dr. Abdul Qahir Qamar, Director of the Research and Studies Department at the Academy, and Mr. Mourad TLiLi, Advisor to the Secretary General of the Academy for Media and Public Relations. 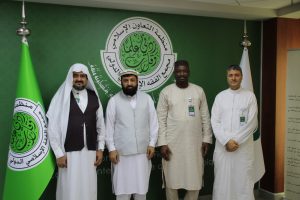