His Excellency Mr. Shimmura Izuru, Consul General of Japan in Jeddah, Kingdom of Saudi Arabia, visited the headquarters of the General Secretariat of the International Islamic Fiqh Academy (IIFA) on 25 Tuesday Ramadan 1443H corresponding to 26 April 2022G. His Excellency Prof. Koutoub Moustapha Sano, Secretary General of the Academy, welcomed him and thanked him for his visit, which is the first of its kind for His Excellency since he came to KSA to undertake his duties.

His Excellency Mr. Shimmura Izuru expressed his deep thanks and great gratitude to His Excellency the Secretary General of the Academy for the good reception and warm welcome, stressing his great interest and keenness to make this visit to the Academy in the context of his country’s relentless endeavor to strengthen relations of cooperation and coordination with the Organization of Islamic Cooperation (OIC) and its affiliated bodies, especially the International Islamic Fiqh Academy. 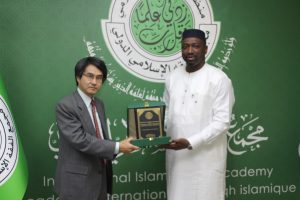 His Excellency added that his country’s government views with appreciation the moderate and sober thought offered by the Academy and all commendable efforts to spread moderation and peaceful coexistence between religions, and that he looks forward to more cooperation with the Academy in order to serve these noble humanitarian goals, by organizing some purposeful scientific activities within Japan and beyond.

His Excellency also affirmed the Academy’s readiness to enhance awareness among Muslim communities of the importance of adhering to the requirements of citizenship in their countries, and the need to respect laws and regulations while preserving their religious identity, as there is, in fact, no conflict between religious affiliation and loyalty to the country in which the Muslim man resides. Then, His Excellency expressed the Academy’s readiness to organize scientific events inside Japan directed at Muslim communities that serve these ideas, and he presented his Excellency with an official invitation to attend the symposium that the Academy intends to organize soon on the issue of fatwas within Muslim communities.

The meeting was attended by Mr. Mohamed Al-Mondher El-Chouk, Director of Cabinet Affairs and Protocol at the Academy, and Mr. Mourad TLiLi, Advisor to the Secretary General of the Academy for Media Affairs. 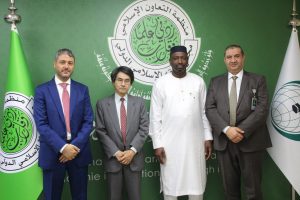