H.E. Prof. Koutoub Moustapha Sano, the Secretary General of the International Islamic Fiqh Academy (IIFA) participated on 14 Sha’ban 1443H, corresponding to 17 March 2022G, in a webinar Roundtable on: “OIC Through Decades: Challenges and opportunities Ahead”. The Roundtable was jointly organized by Institute of Strategic Studies in Islamabad, Pakistan and Middle East Monitor London.

In the introduction, Ms. Amina Khan, Director Centre for Afghanistan, Middle East & Africa (CAMEA) at the Institute of Strategic Studies (ISSI), Islamabad, welcomed the participants and the speakers noting the significant role of the Organization of Islamic Cooperation (OIC) in fostering the economic, cultural and political interests of Muslims around the world. She added that Pakistan as a founding member state of OIC, has been playing a leading role within OIC institutions that allowed it to further the interests of OIC and Muslims around the world. One of those achievements was the recognition of Islamophobia and the UN’s declaration of 15th March as an International Day to combat Islamophobia. This Pakistani initiative was supported by the member states of the Organization and countries loving harmony, tolerance, peace and coexistence

In his opening remarks, Ambassador Aiazaz Ahmad Chaudhry, Director General of Institute of Strategic Studies Islamabad, thanked the speakers for joining the Forum from different parts of the world. He particularly thanked Pakistan’s Permanent Representative at OIC Ambassador Rizwan Saeed Sheikh for identifying such illustrious personalities and intellectuals. He reiterated Pakistan’s commitment to OIC particularly the plight of Palestinians which was the main cause of the founding of OIC among causes of concern to Muslims around the world. He commended the great role played by the OIC in dealing with the Islamic causes since its inception. 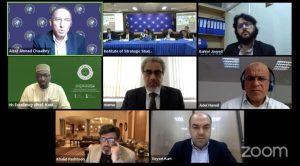 Dr Daud Abdullah of Middle East Monitor pointed out the great potential of OIC as the second largest intergovernmental organization after the United Nations. He alluded to the unfolding new realities following the Corona pandemic and the fall-out from the Ukrainian crisis and the emergence of new alliances that will make it incumbent upon the OIC to restructure itself to face the new challenges and seize the new opportunities. Therefore, there is a need for conversation and engagement with civil society organizations.

The Pakistani Foreign Minister His Excellency Shah Mahmood Qureshi in a recorded speech emphasized the paramount importance of OIC in terms defending the rights and interest of Muslims in different parts of the world through dialogue and peaceful means. He particularly commended OIC’s efforts in combating extremism and denigration of Islam. He concluded by saying: “Pakistan’s hosting of the 48th Council of Foreign Ministers of the OIC that will coincide with the 75th Anniversary of the Founding of Pakistan is an indication of the commitment of Pakistan to the vision and mission of OIC at all levels in order to achieve Muslim solidarity”.

In his speech Prof. Koutoub Moustapha Sano, Secretary General of the Academy, highlighted the important role that OIC has been playing in addressing Muslim causes. He expressed his gratitude to the organizers of the Roundtable and the Government of Pakistan for this timely meeting that will come ahead of the 48th Meeting of the CFM of OIC in Pakistan, which will articulate visions, suggestions, and initiatives for the upcoming ministerial meeting. He mentioned that: “the collective voice of OIC is a source of great inspiration and hope for over two billion Muslims around the world and that the potential of OIC cannot be underestimated and its ability to defend the rights and causes of Muslims around the world”. He added that the affiliated and specialized organs of the OIC should play an important role in dealing with the causes of the Ummah, especially with the political support from Muslim leaders, in support of the OIC overall efforts in the cultural, scientific, social and intellectual realms. His Excellency affirmed the need to seize the opportunities to transform OIC into people’s organization with real solidarity between Muslims.

He added: “I have a dream that one day there will be a single currency for OIC member states and a common passport for free movement between them. I truly dream that the day will come when extreme poverty and ignorance will disappear within OIC member states through close solidarity between wealthy and less developed countries, by making the most of bilateral trade, sharing successful experiences in the fight against poverty, illiteracy, and moving forward in defending the rights and interests of Muslims living outside the Muslim world”.

Prof. Sano concluded by reiterating the intellectual, scientific and practical importance of the Prophetic saying that: “the similitude of the believers in their compassion, mercy and sympathy as one body, if a member complains about something, the rest of the body will feel the pain.” This he notes represents the foundation of a way of life and rooting for the nature of the relations that should prevail between the peoples and countries of the Ummah. It is unity in diversity, diversity in unity, solidarity, cooperation, support and synergy, it is integration, communication and coordination.

Finally Ambassador Rizwan Saeed Sheikh, Pakistan’s Permanent Representative to OIC, spoke about the role of the OIC in promoting unity and cooperation among its member states. In fact, he mentioned that the theme chosen for the 48th CFM meeting in Pakistan is “Partnering for Unity, Justice and Development”, to emphasize the significance and the need to unify the Ummah’s voice, achieve justice and development in all member states of the OIC. He concluded by commending the great role played particularly by the Academy and the Islamic Development Bank Group in realizing the OIC’s vision.

The Webinar was attended by Ms. Sarah Amjad Hussein, Director of Family and Women’s Affairs Department at the Academy and Dr. Alhagi Manta Drammeh Head of International Cooperation and External Affairs Division at the Academy.