His Excellency the Secretary General of the International Islamic Fiqh Academy (IIFA), Prof. Koutoub Moustapha Sano, participated, via video technology, in the international scientific symposium organized by the Islamic Organization for Medical Sciences (IOMS) on the topic “Awakening Islamic medicine in the fight against drugs” on Wednesday 25 Safar 1444H corresponding to 21 September 2022G at the organization’s headquarters in the State of Kuwait.

This symposium is held under the patronage and in the presence of His Excellency the Kuwaiti Minister of Health, Prof. Khaled Al-Saeed, and in cooperation with “Ghiras”, the Kuwaiti national awareness project for drug prevention, and in the presence of a large number of international officials, experts and researchers specialized in the field of drug prevention and addressing its health and social risks.

His Excellency delivered a keynote speech during the opening ceremony, which he started with thanks and praise to the Islamic Organization for Medical Sciences for its blessed efforts in the field of health awareness and the preservation of the human life. He also thanked the organizers of this important specialized symposium and for the good selection of its topic because of its profound and significant impact on young people inside and outside the Muslim world and protecting them from the pests that beset them and the conspiracies that are being hatched against them and aiming to blind them and prevent them from playing their basic and essential role in building the future of Ummah and charting the features of a bright future for many generations of young men and women who bear the responsibility of preserving morals and the lofty principles that our true religion brought. 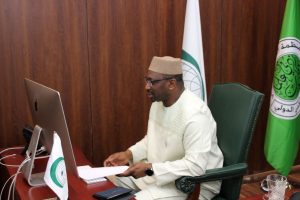 His Excellency added that one of the rules that the Islamic Shariah brought is the preservation of the five supreme objectives expressed by Imam Al-Ghazali by saying, “The purpose of the Shariah from the creation of mankind is to preserve for them their religion, their soul, their intellect, their family, and their wealth. Anything that includes the preservation of these five principles, is a benefit, and anything that misses these principles is a corruption, and preventing them is a benefit.” These purposes are known as the five necessities, and they mean preserving the religion, preserving the soul, preserving the mind, preserving offspring, and preserving money. Preserving the mind is one of the most important of these purposes, and it is one of the most important conditions of commissioning (Islam, reason and adulthood), as stated in the authentic hadith: “Three are not held responsible: the insane until he becomes sane, the person asleep until he wakes up, the child until he reaches puberty.” Looking at the issue of drugs, we find that it mainly impairs the mind, and destroys it partially or completely, which makes its users in many cases descending to the level of animals. {Or do you think that most of them listen or understand? They are only like cattle—no, more than that, they are astray from the Right Way} Al-Furqan: 44. Therefore, no scholar or sane person doubts that it is forbidden to use it, trade in it, and promote and distribute it because of the negative consequences that it entails.

His Excellency also made it clear that the effects of drugs do not stop at destroying the mind alone, but rather they extend to harming the rest of the other four purposes, because the drug user does not care about his religion, does not care about his Creator, is not embarrassed by his disobedience, and is not ashamed of people seeing him commit his sins and crimes, which leads to the corruption of his religion. Its use may lead a person to steal, rape, cheat, and defraud to obtain money by any means to buy and use drugs, which harms the purpose of preserving money, and may even lead its abusers and addicts to murder or rape. Moreover, its effect on the purpose of preserving offspring is apparent, because its use, as it is medically established, weakens sexual ability, distorts fetuses and weakens jealousy in the addict to the point that he neglects his honor for the sake of drugs.

His Excellency concluded by saying that the effect of drugs affects all the necessary purposes with harm and nullification, and that when we take a closer look, we find that drugs are more insidious and more forbidden than alcohol because it destroys the mind, destroys morals, corrupts religion, destroys money, spreads immorality and corruption, crushes dignity, destroys honor and chivalry, and fail security. It is in fact well-known that it is the most important means used by terrorists to blow themselves up and wear explosive belts in their operations. Accordingly, His Excellency called on all parties involved in the sensitisation and prevention process of the danger of drug use and addiction to intensify efforts, unite forces, coordinate visions and complete cooperation among peoples and nations in order to preserve the youth and protect our societies from this cancer that eats away at them.