Proceeding from the desire of the International Islamic Fiqh Academy (IIFA) to strengthen relations of cooperation and communication with fatwa bodies and institutions of collective ijtihad within the member states of the Organization of Islamic Cooperation (OIC), and considering the scientific status enjoyed by the UAE Council for Fatwa throughout the Muslim world, and based on the Academy’s keenness to coordination and reconcile between the ijtihad of Fatwa institutions with regard to calamities and developments, and inspired by the approach of Islam in strengthening the bonds of solidarity between the jurists and scholars of the Ummah, His Excellency Prof. Koutoub Moustapha Sano, Secretary General of the Academy, and His Excellency Dr. Omar Habtoor Al Darei, Director General of the Emirates Council for Fatwa (part of the Presidential Cabinet), signed a memorandum of cooperation on Thursday 16 Rabi’ al-Thani 1444H corresponding to 10 November 2022G in the Emirati capital Abu Dhabi, in the presence and under the supervision of His Excellency Sheikh Abdullah Bin Bayyah, Chairman of the Council.

This agreement aims to develop a comprehensive plan for introducing Islam, removing suspicions, responding to campaigns of skepticism about Islam in various ways, and setting a comprehensive plan for the methodology of issuing fatwas that people need on issues that are frequently asked about and the topics that should be addressed. It also aims for the two parties to cooperate in the field of research and studies related to the preservation, revival, investigation, dissemination and distribution of Islamic heritage, in addition to organizing periodic meetings between scholars and researchers in Islamic sciences to confront various issues and developments and address them in a manner that combines authenticity and modernity. The memorandum also aims to enhance cooperation and continuous communication, and to strengthen coordination between the two institutions in the areas of organizing conferences and symposia, holding workshops and training, exchanging publications and periodicals, and representing the two sides in the work of conferences and symposia that are held with the knowledge of each in the field of common interest between them. 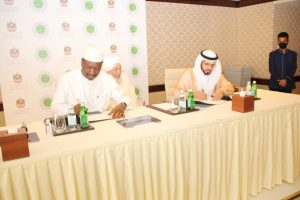 Following the signing of the memorandum, His Excellency the Secretary General expressed his great pleasure, saying: “I am very happy and pleased to sign this agreement with a well-established fatwa institution headed by the scholar Sheikh Abdullah bin Al-Mahfud bin Bayyah, and whose members consist of the elite of eminent scholars of the United Arab Emirates distinguished by their commitment to the approach of moderation, tolerance and openness. I take this honorable occasion to extend my gratitude to the UAE leadership and people for the continuous care and generous support extended to the Academy, and my highest appreciation to the UAE Council for Fatwa for its precious trust in the Academy, and its sincere desire to strengthen relations of cooperation, coordination and partnership with it as a practical embodiment of an important historical stage for the Ummah in which the honor of serving Shariah exceeded the limits of individual and regional efforts, and crossed the political borders in the largest contemporary organization of collective ijtihad on the one hand, and collective fatwa on the other , in the belief of the rulers in the Muslim world that collective ijtihad is the closest to the truth, the most reliable and the wisest. We in the Academy sincerely believe that the Academy is an extension of the Fatwa and Shariah in the Muslim world, and is not a substitute for any of them, nor a competitor to any of them, but it is a supporter and proponent of the national and regional fatwa bodies, and seeks to strengthen relations of cooperation and coordination with other distinguished fatwa institutions inside and outside the Muslim world, in order to avoid contradictions and inconsistencies in opinions and fatwas.

Finally, we raise the palms of humility and supplication to the Noble Lord to preserve for us and the Ummah His Eminence the Father, the scholar Sheikh Abdullah bin Bayyah, whom we consider to be one of the first remnants of the righteous ancestors in knowledge, Fiqh, and behavior, may God grant him long life, benefit us, the Ummah and the world from his knowledge and thought. And to all of you, the eminent and virtuous members of the Council, all thanks and appreciation, and may God direct your steps, and preserve the security, prosperity, and stability of the United Arab Emirates.”

For his part, His Excellency the Director General of the Council expressed his happiness for this occasion, saying: “This step comes within the strategy of the UAE Council for Fatwa to establish global strategic partnerships that stem from the Council’s vision of “universalism and proactiveness in fatwas to consolidate human values,” and in line with its endeavor to build partnerships that provide fatwas in a civilized manner based on spreading virtues, tolerance and respect for human beings, and upholding the values ​​of moderation and openness to different cultures and peoples of the world”.

It is worth noting that the UAE Council for Fatwa is the official reference for fatwas in the United Arab Emirates by uniting efforts, visions and goals to organize the work of government agencies, institutions and individuals related to fatwa affairs. The council is responsible for issuing public fatwas in the country on various issues and topics, or at the request of official government agencies, institutions or persons, licensing the practice of fatwas in the country, qualifying and training muftis and developing their skills, in addition to issuing Shariah studies and research related to various areas of development, and supervising the Fatwa Center at the General Authority for Islamic Affairs and Awqaf with regard to the fatwas issued by it. The council includes in its membership personalities with expertise and specialization in Islamic Shariah sciences in the country and abroad. 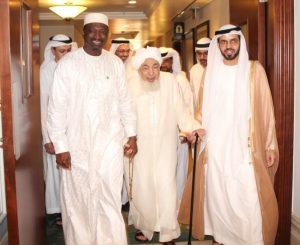