At the kind invitation of the management of the Islamic Cultural Center in London, UK, His Excellency Prof. Koutoub Moustapha Sano, Secretary General of the International Islamic Fiqh Academy (IIFA), delivered the Friday sermon at the Great Mosque of London, on 17 Rabi’ al-Thani 1444H corresponding to 11 November 2022G, in both Arabic and English, and its theme was “our duty to our nation.” 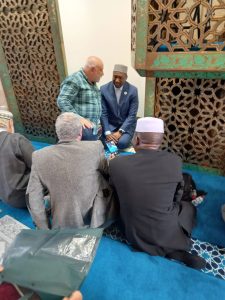 His Excellency began his sermon by reminding the worshipers that the entire universe belongs to God Almighty, that the whole earth belongs to God Almighty, and that man is responsible for building the universe, reforming it, and managing its affairs wherever he is and wherever he resides, emphasizing that God created us peoples and tribes to know each other. Hence, the countries in which we live and reside have rights that we must fulfill, and duties towards which we must adhere; Among the most important of these rights, we have to love them, protect them, preserve their security, stability, and prosperity, and cherish our belonging to them in recognition of their favor, bounties, and benevolence to us. If a Muslim takes a country as his homeland and his place of residence, he must fulfill the aforementioned rights, abide by its legislation, respect its laws, and stay away from everything that contravenes the regulations that have been established in order to protect him, care for him, provide job opportunities, and a decent life for him and his family. Then His Excellency explained that a British Muslim should be proud of being British and a Muslim at the same time, and he should love this country, which provided him with everything he needs of care, protection, and a decent living, and there is no conflict between being a Muslim and British at the same time, for citizenship and religious affiliation are two things that do not contradict, conflict or oppose, but rather complement, support, and sustain each other. The country that you have chosen to live in, work in, make a living from its bounties and opportunities, and raise your children in it, does not conflict with your preservation of your religious identity. Islam is greater than being confined to one particular country or confining the Islamic presence to a particular country. Islam came to the entire world, and to the people of the earth as a whole. Then His Excellency touched on the morals and behavior of a Muslim in any country. The Muslim must be a model in honesty, work, earnestness and integrity. The best of deeds is for a person to eat from the work of his hands and not be a burden on society. The Muslim must also raise his children a sound upbringing that makes them producers and good citizens, who contribute to building and preserving nations, and participate in their development, progress and renaissance. His Excellency also called on the masses of worshipers to stay away from violence, extremism, fanaticism, terrorism, and everything that harms nations and offends the reputation of Islam and Muslims. Islam is innocent of violence against children, women and animals, rather it is innocent of offending the environment. The Muslim is not violent, extremist, cursing, or insulting, rather he is merciful, honest, gentle, serious and straight in his behavior and actions. His Excellency also made it clear that combating the phenomenon of Islamophobia does not come with violence, but rather by presenting Islam and its values ​​ in an objective and calm manner. Insulting the Prophet, peace and mercy be upon him, is not met with violence or screaming, but is met with serious organized work by introducing people to this Prophet and his biography, his great morals, and his righteous approach. Humanity has never known in its history a great, merciful, loving, compassionate person like the Prophet Muhammad, who only fair-minded people know all the details of his life, and his biography. He concluded his sermon by calling on worshipers to stay away from all forms of violence, hatred of religions, contempt for symbols, and intolerance. Then His Excellency prayed to God to protect the United Kingdom, and the whole world, from the scourge of wars, disasters and strife.

The Friday prayer was witnessed by large crowds that filled the mosque and its squares and surrounding roads, and their number was estimated at more than five thousand worshipers. It should be noted that the sermon received wide approval from the worshipers and the national and Islamic leaders in Britain, as it was extensively circulated and disseminated through social media platforms. 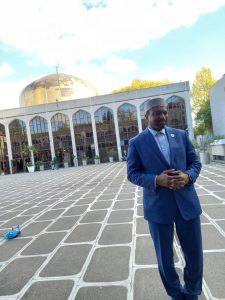